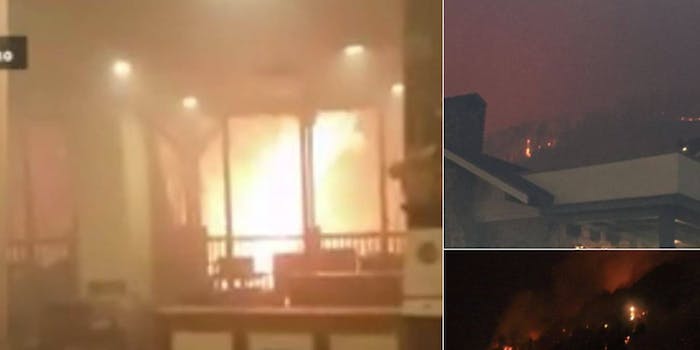 A deadly fire in eastern Tennessee forced authorities to issue a mandatory evacuation of Dollywood and several other tourist towns in and around Great Smoky Mountains National Park on Monday night.

Police in nearby Gatlinburg started going door to door on Monday to encourage voluntary evacuations, but the fire quickly escalated as the wind picked up, forcing local officials to declare a mandatory evacuation.

A representative for Dolly Parton confirmed to ABC News that Dollywood resort was evacuated Monday night and that, at least at the time, the fire had not yet reached the inside of the park. Other areas were less fortunate.

Over 100 homes and 30 other structures, including a 16-story hotel, have already been claimed by the fire, and one person has been injured. An estimated 1,200 were relocated to a local shelter, according to a spokesperson for the Tennessee Emergency Management Agency (TEMA).

Videos and photos from residents in the area offer a terrifying look at the fire’s approach and destruction—and residents’ desperate attempts to evacuate.

It’s unclear where this video was filmed in Gatlinburg, but you can hear the passenger repeatedly say, “Every cabin is on fire.” It’s horrifying.

You can hear the panic in Vicky Cowden’s voice in this video when she says, “Oh my god. It’s so hot.”

People were pinned down inside the Park Vista Hotel, where the fire was too deadly to risk leaving.

Logan Baker is still inside the Park Vista Hotel in Gatlinburg. He said the flames there have died down but it's too dangerous to go outside pic.twitter.com/qQFAf7ziZv

The fire is put out at the Park Vista Hotel, but people are still in there and can not be evacuated at this time. #Gatlinburg

The latest report from TEMA indicates that wildfires are still burning in Sevier County, and fire crews are actively working to control the situation. Rain is also in the forecast, which could help that effort.

This was just sent to us by a friend in Gatlinburg. This is on Airport Road up by Sidney James Lodge. pic.twitter.com/xhrgtqj6el

Sharon Pinyan, leaving Gatlinburg, reports… “Evacuated Gatlinburg. A car behind us caught on fire due to the flames jumping the road.” pic.twitter.com/qislDoxpl0

TEMA is recommending that residents resist using their cellphones unless it’s emergency, to avoid taxing the mobile system. It’s also recommended that residents update their status with both the American Red Cross and Facebook’s Safety Check.