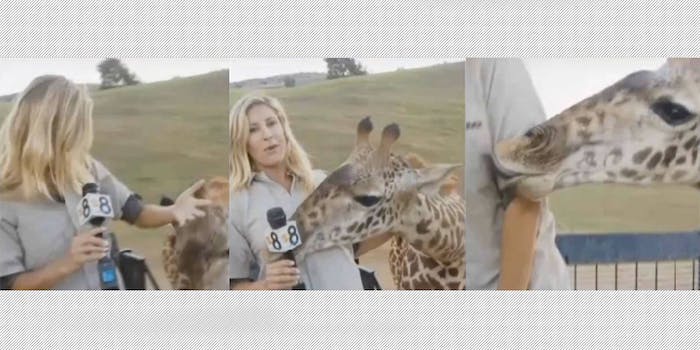 Looks like CBS 8 reporter Ashley Jacobs made a new animal friend on a live broadcast. The giraffe getting close to her at the San Diego Zoo Safari Park looks like he met the love of his life. Or at least someone to aggressively slobber upon and nuzzle.

Jacobs was reporting at the massive wildlife complex to promote San Diego Zoo’s Food, Wine, and Brew celebration, an annual benefit featuring the holy trinity of festival fare, plus bands and activities.

Needless to say, the young giraffe was pretty hyped to be on camera. He probably won’t win the reporter’s heart (Jacobs is married), but now all those lonely giraffes who stumbled on this viral video know who to call when they need a good head-butting.