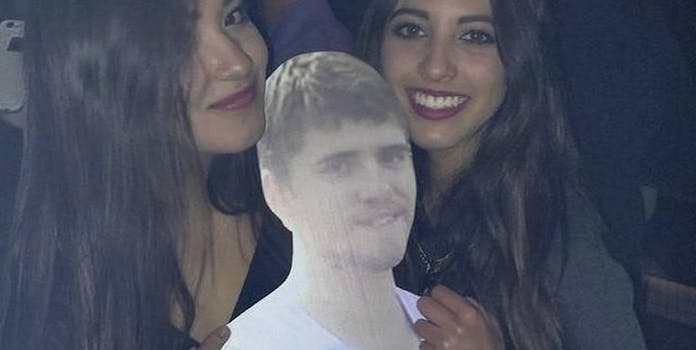 Well, at least the cardboard cutout had a blast.

Kevin and his friends thought they had everything planned out perfectly. It was Kevin’s birthday, and he and his bros were going to head out of town and celebrate him in the best way possible.

They were going to hang out at the club, get in a little weightlifting work, play soccer in the streets, and stay out until 2am eating tacos.

But Kevin’s fiancée said no to the trip. Luckily for us, his friends didn’t take no for an answer. They went ahead with the birthday trip and brought along a cardboard cutout of Kevin so at least something resembling the birthday boy could have a blast.

According to the redditor who posted the photos—a bro named AteMyWheaties—the crew vacationed in Montreal.

But the plot thickened when Kevin sent that redditor the following text message after the photos appeared on Imgur:

Update, she is now mad because I told her im definitely getting a lap dance this weekend. Cardboard Kevin is held to the same rules as alive Kevin. Shit is getting wild.

Perhaps Kevin’s fiancée was right to keep him home and out of harm’s way. Because if Kevin is one-tenth as popular with the ladies as his cardboard cutout, there’s almost no chance he would have stayed on the right side of monogamy.

Of course, we haven’t heard Kevin’s fiancée’s side of the story, so it’s unfair to judge her in any way. But one thing is clear:

Update 11:50am CT: Welp, the real Kevin has shown up to set the record straight—and it seems he’s pretty damn pissed at his “friends”:

You know what they say: The best revenge is an awesome honeymoon.

Oh, and another redditor made some helpful Photoshop edits.