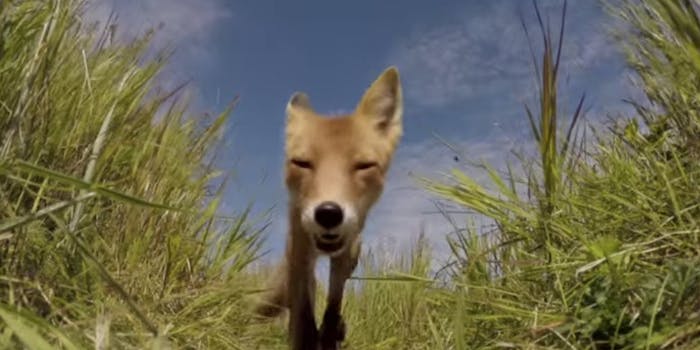 No foxes were harmed during the making of this film. But we can't say the same for the GoPro.

We’ve answered the question, “What does the fox say?” But what, exactly, does the fox eat? GoPros, apparently, if this video by YouTuber TheOpenLens is any indication.

According to the video description, TheOpenLens had an up close and personal encounter with a fox during a recent trip to Round Island, Alaska, where he went to shoot footage of the native wildlife for a planetarium show.

While filming sea lions in the wild, he came across a fox, and put his GoPro on the ground “in hopes of getting a closeup,” he writes in the description. Well, he got his closeup, but not so much of the fox itself, who headed straight for the GoPro and immediately started making a nice little breakfast of it.

So did the GoPro survive its harrowing ordeal inside the fox’s jaws? Shockingly, yes, though not without significant injury:

When the fox ran off, I thought I’d never see my camera again. For about 8 minutes we looked for it, then there it was! It turns on and records, but the lens is messed up and I’ll need to have it repaired. I’m glad the fox itself didn’t get hurt or swallow anything that could have harmed it.

Get well soon, GoPro. And as for the fox: It might not be a bad idea to start flossing regularly. That tartar buildup looks bananas.