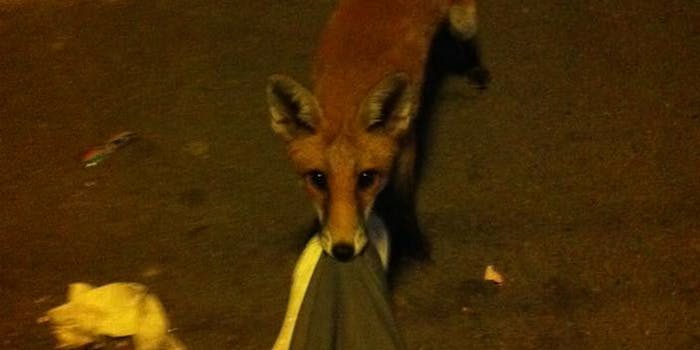 This could've turned out a lot worse.

There are a lot of horrible things to drunkenly wake up to. A rando in your bed. A pool of urine in your bed. But there can’t be anything as jarring as coming to because a motherfucking fox is trying to take off your pants.

Steve Gould was out drinking with some buddies in London, and, after getting properly smashed, decided it was time to head home. But on the train ride back to his place, he fell asleep and woke up past his stop. He ended up passing out at a bus station while looking for a way to get home, and an hour later woke up to a fox chewing on his shoe and pants leg.

Naturally, he took a picture of the lil’ guy.

Gould told the Evening Standard, “”God knows what would have happened if I hadn’t woken up. I could have lost a leg, I don’t know…. But he was doing no harm. He was quite calm, he wasn’t going to attack me.”

Still better than waking up with a rando in your bed? Guess that’s up for discussion.