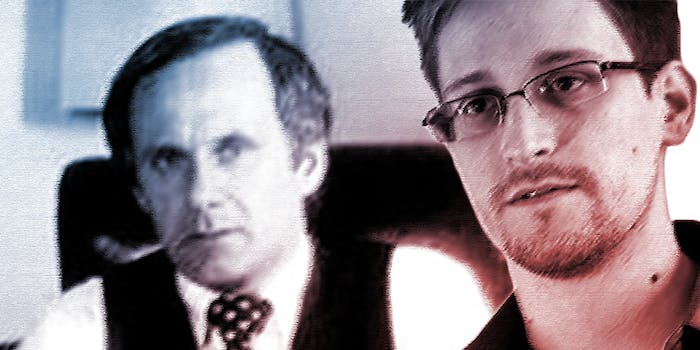 "I believe you have done the right thing," Gordon Humphrey, former Republican Senator from New Hampshire, wrote to Snowden.

According to a post on the personal site of Glenn Greenwald, the Guardian journalist who worked with Snowden to reveal the NSA’s large-scale online surveillance program, Humphrey extended his support to the whistleblower.

“Provided you have not leaked information that would put in harms way any intelligence agent,” Humphrey wrote in an email yesterday, “I believe you have done the right thing in exposing what I regard as massive violation of the United States Constitution.”

Humphrey went on to cite his time in the Senate, on the Foreign Relations Committee, the Armed Services Committee, and the Judiciary committee as “good grounding to reach my conclusion.”

“I wish you well in your efforts to secure asylum and encourage you to persevere,” Humphrey added.

In his reply, Snowden thanked Humphrey for his letter and further reassured the former Senator that he would not disclose any information harmful to the U.S.:

Though reporters and officials may never believe it, I have not provided any information that would harm our people – agent or not – and I have no intention to do so…While it has not been reported in the media, one of my specialization was to teach our people at DIA how to keep such information from being compromised even in the highest threat counter-intelligence environments (i.e. China). You may rest easy knowing I cannot be coerced into revealing that information, even under torture.

In response to a letter from Greenwald authenticating Humphrey’s email, the former senator concluded, “I object to the monumentally disproportionate campaign being waged by the U.S. Government against Edward Snowden…Former members of Congress, especially, should step forward and speak out.”