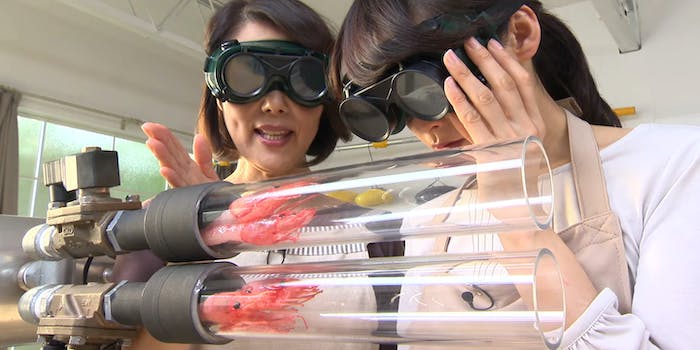 They're shooting shrimp across the room to show you fast your LTE could be.

A viral video of two women using a gun to speedily cook shrimp is more than just a hilarious and weird video—it’s also an ad for a Japanese cell phone company.

The video features a two-woman team showing how to cook shrimp in 3 seconds using a gun that shoots the raw fish across several stages of preparation, from flour to egg to breading and finally fire. The video has raked in more than 5.5 million views since it appeared online Nov. 28, but it’s not really about shrimp, it’s about how fast the LTE service is on DoCoMo. Of course, if you don’t speak any Japanese, the advertising message is totally lost. It’s just amazing footage of a shrimp flying through a room on its way to delicious consumption.

The bizarre video raises the question: Which of our weird ads would make no sense without our knowledge of English? Imagine, if you will, the classic Folgers “incest” commercial—in which a brother and sister hug, laugh, and pin gift ribbons on each other—without sound. We’d have some explaining to do.