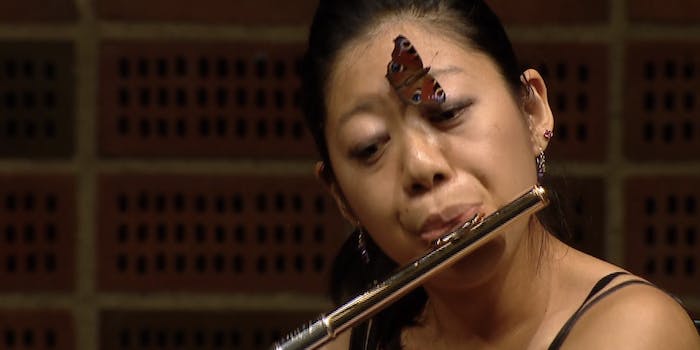 Butterflies in her stomach? Nope, this flute competitor gets butterflies on her face.

In a moment that seems straight from a Disney fairytale, a flutist’s solo at an international competition was interrupted when an unexpected accompanist in the form of a butterfly landed right on her forehead.

Japanese flutist Yukie Ota was completing in the Carl Nielsen International Flute Competition when a butterfly perched on her forehead and stayed there for more than a full minute while Ota continued to play her solo. Luckily for us, the whole moment was captured on video.

If Disney films are to be believed, creatures flocking while you’re performing music is the sure sign of a princess. As far as we know, the extra visual assistance of the offending bug did not help or hinder her scores in the competition.