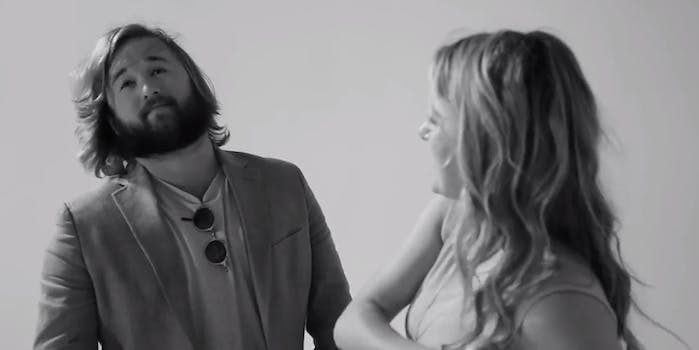 Remember that video of strangers kissing? These folks took it full ‘Fight Club’

It's a slap at first sight.

Did that video of strangers kissing hit you the wrong way? Here’s something that might feel a bit more natural—like getting slapped.

A few months after the parodies for that kiss video died down, Max Landis took a refreshing albeit more violent take on the video and filmed some of his friends and acquaintances (including The Sixth Sense’s Haley Joel Osmont) slapping each other in the face.

Seeing a bunch of people kiss each other was nice, but this is so much better. There’s even a more genuine sense of intimacy with these subjects, fewer than half of whom are actors or models.

While it later came out that the original video was a clothing commercial, Landis wanted to avoid any confusion about his video’s authenticity, while still doing a direct parody. There’s an accompanying video where Landis wrote a long explanation in the description as to why he made it.

“The theory I had was that violence minus aggression is intimacy,” Landis said. “It’s the idea of trusting someone to hit you and it being a social interaction. A slap, mitigated by permission, is a hug.”