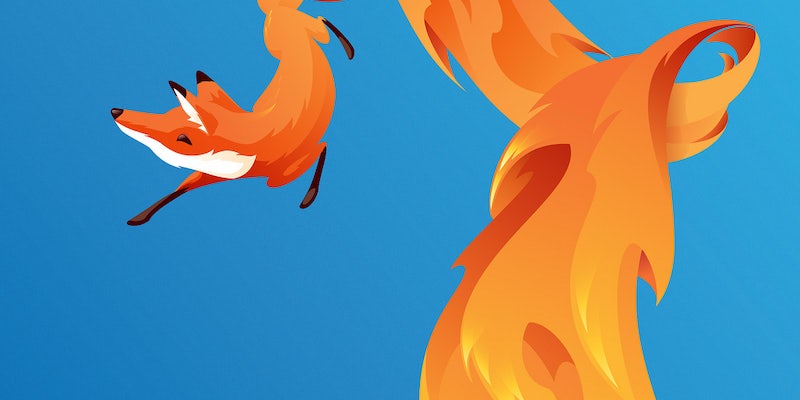 If the reaction to Mozilla from angry Twitter users is any indication, there aren't always two sides to everything.

Mozilla’s social media accounts seem to want women in gaming to examine all sides of the metaphorical rocks that have been hitting them in the face for the last two months.

While the rest of the world may be eager to finally put the season-long culture war that is Gamergate to rest, many businesses and organizations are just now catching wind of the battle that has plagued the gaming community since late August. Some of them have blundered into accidental support of the hashtag campaign, which has drawn criticism from around the Internet and around the world for its association with ongoing harassment, rape, and death threats of women in gaming.

And there are some who apparently engaged the controversy deliberately, as Mozilla did Friday when it hosted an anti-Gamergate opinion piece about the controversy on its brand-new online tech culture magazine, the Open Standard. The piece, by writer Audrey Watters, argued that the issue of Gamergate harassment of women like Anita Sarkeesian was important to all of tech education.

“That so many men in ed-tech continue to minimize the experiences of harassment and violence against women in ed-tech is pretty telling about whose values and whose risks are being hard-coded into the infrastructure,” she wrote.

Gamergate proponents rushed to demonize Mozilla for its publication of the piece, flooding it with comments and tweeting that they were uninstalling Firefox from their computers. In response, the official account for Open Standard tweeted an invitation for a rebuttal piece, which went live Tuesday.

The “rebuttal,” entitled “Yes, Gamergate is everyone’s issue,” was written by games journalist Georgina Young. It essentially reprised the arguments of Gamergate’s accompanying hashtag, #NotYourShield, pointing out that plenty of women and minorities were participating in the hashtag, and arguing that the progressive ideals steadily growing in gaming had created a culture of victimhood—although the 52 percent of women who leave gaming and other STEM-related industries due to hostile male-dominated cultures might disagree.

“I am a woman who wishes to listen to both sides of the debate, and so I must have internalized my misogyny, I must be misguided, and blinded by the ideas of men. I am now excluded from a community that used to include me,” she wrote.

Had Mozilla simply stopped there, the controversy might have played out over Twitter until everyone moved on to the next Gamergate-related incident. But the two social media accounts associated with the non-profit organization, @Firefox and @TheOpenStandard, proceeded to engage in behavior many followers found offensive.

First, the official Firefox Twitter chatted with Eren Gjoni, the gamer responsible for launching the sex scandal that led to Gamergate.

Then the official Twitter for Open Standard retweeted several pro-Gamergate supporters thanking it for hosting Young’s rebuttal piece, something it had not done for readers who appreciated Watters’ piece. 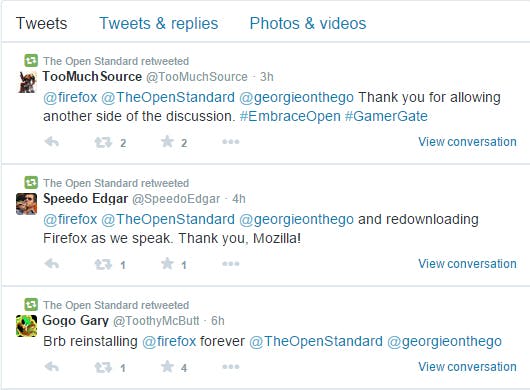 @synonymous_drea We think it’s an important issue and it should be looked at by all sides.

The Firefox Twitter account then went on to thank numerous Gamergate proponents who tweeted encouragement at them after the pro-Gamergate opinion piece for being “active participants.” The problem? The active participation from the Twitter users they responded to has included homophobic and ableist slurs, accusing women of “playing their victim cards,” and tweeting rape jokes, sexual harassment jokes, and jokes about violence against anti-Gamergate Twitter users.

While that was happening, the Open Standard Twitter account began arguing with this reporter and a number of other women on Twitter, insisting at one point that they must “disapprove” of the “facts” in Young’s article, a number of whom came away from the exchanges believing that the account must have been hacked.

@theoncominghope @ajaromano @firefox There are facts in both pieces. What you don’t approve of is the interpretation of the facts.

.@TheOpenStandard @mozilla Hopping christ on a pogo stick, you _must_ be trolling.

@ajaromano @TheOpenStandard @firefox i’m 90% sure these accounts have been hacked. this has to be trolling. it cannot be real.

Whatever strategy of back-and-forth inclusiveness Mozilla may be incorporating in order to warrant this kind of dual-sided approach, the women and other progressive gamers who have had to suffer the effects of Gamergate for the last two months (and counting) have lost all patience for it. Firefox may think it’s just being objective, but the reality is that the encouragement is amplifying the voices of Gamergate members who are already planning to branch out to Tumblr just as the rest of us are trying to declare the whole thing dead. That is, it’s doing nothing to bring about the culture of shame many people want to create if we’re to put an end to the controversy once and for all.

But it has damaged my opinion of Firefox.

I’ve used Firefox, or some version of a Mozilla product, virtually every day for the last decade.

But just as soon as I can install a substitute backup browser, I’m uninstalling.

Update 7:30pm, Nov. 5: Despite the pretense of her rebuttal, Georgina Young clarified to the Daily Dot that she is neutral on the issue of Gamergate. This article has been updated accordingly.