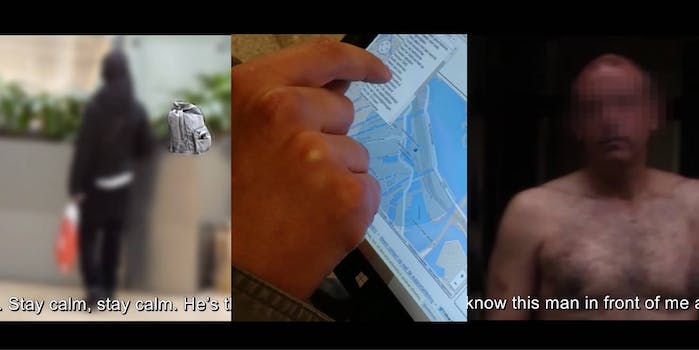 This is a thief's worst nightmare.

Upon having a phone stolen, most people would panic for a hot second before trying to look up its location and filing a police report. But for one filmmaker, getting his iPhone swiped was all part of the plan.

Anthony van der Meer from the Netherlands installed software on an Android phone to remotely control the device, allowed it to be stolen, learned about the thief in the most weirdly intimate way possible, and then made a documentary about the whole ordeal.

In the short film Find My Phone, van der Meer follows the man who stole his phone from the streets of Amsterdam through Berlin and France, reading the man’s messages and watching his conversations happen in real time.

Van der Meer explains in the film that he developed the concept for Find My Phone after getting his real phone stolen while eating lunch in Amsterdam. He told Het Parool that a woman had come up to his table with a piece of paper saying she needed money. When she left, he realized she had taken his phone off the table.

“After my phone got stolen, I quickly realized just how much of my personal information and data the thief had instantly obtained,” van der Meer wrote in the video description. “However, to what extent is it possible to truly get to know someone by going through the content of their phone?”

After installing hidden software on the phone that was nearly unremovable, van der Meer went to a public place for several days and sat next to a backpack, leaving his phone waiting in the backpack pocket for a would-be thief. But no one touched the phone. It looked like he was going to strike out in Amersterdam, too, but just as van der Meer and his team were leaving for the day, after the hidden camera battery had died, the phone was swiped.

Throughout the film, van der Meer takes photos, records audio and video, and backs up the phone’s memory to his computer, all from the team’s workspace. He reads the thief’s messages, sees where he travels, and listens in on his personal conversations. Getting insight on this stranger’s life becomes bizarre, intriguing, and kind of disgusting all at once.

After some time following his suspect around, van der Meer begins to feel sympathy, even pity for the man who wronged him. He eventually even meets the man face-to-face.

Though van der Meer has called off the technological voyeurism, he told Het Parool that the story continues, and that the phone has since resurfaced in Romania.

“But that’s not the end of the story,” van der Meer said. “I would like to make a second part.”