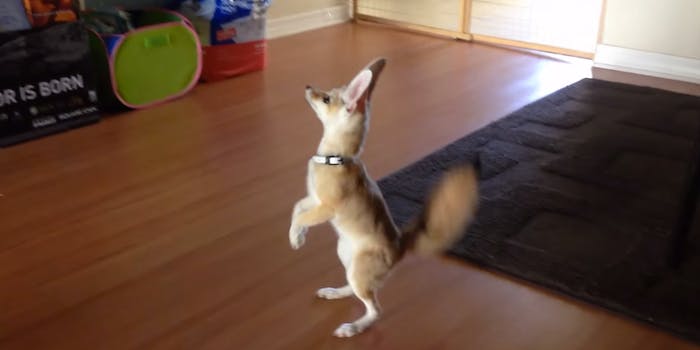 Now this is fox news we can get behind.

What does the fox say? “More bubbles, please!”

We know it’s Monday and you’re in the throes of the “Oh-god-Memorial-Day-was-a-week-ago-and-I-won’t-have-another-three-day-weekend-until-September” slump, but it’s time to perk up with the help of this cute little critter who only has one thing on its mind: popping as many bubbles as it can.

This adorable animal is a fennec, an expensive fox native to the Sahara and known for its large ears. Apparently they don’t get a lot of bubbles in the desert, because this fennec is beside itself.

Maybe you’re thinking, “OK, how cute can a fox catching bubbles really be?” So cute. We were not prepared.

The video comes to us courtesy of the YouTube channel foxesandfriends, which also maintains an informative website about owning foxes as pets.

If you’re looking to buy your own cute bubble-eating companion, however, know that they come at a price: Because fennec are native to Northern Africa, they’re considered exotic pets, and they usually sell for between $1,500 and $2,500.

The fennec is one of only two species of fox that can be properly domesticated, so even though the wild red fox near you might also be attracted to bubbles, it’s probably not a good idea to take one home and raise it as a pet.

You’ll just have to settle for letting the Internet supply you with joy, instead.