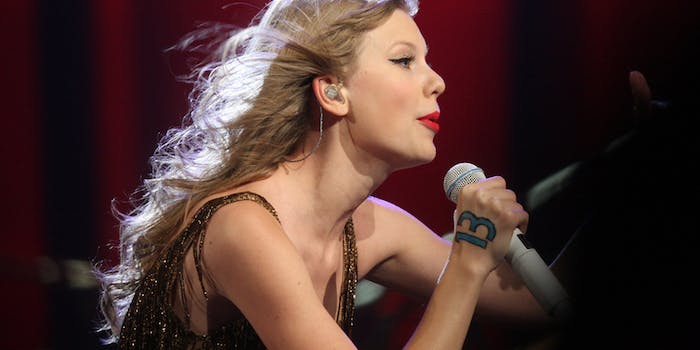 Leaning in with Feminist Taylor Swift

We caught up with Clara over the weekend to talk Taylor, Twitter, and leaning in.

Daily Dot: First of all, congratulations on this success! Did you sleep the first night or were you too busy watching the follower count go up?

DD: So tell us about you.

CB: I’m 21 and I grew up in northern Virginia (just outside D.C.). Right now I am a rising senior at Brown and I’m living in Providence. My major is linguistics, which is pretty random. I just really like grammar. I also have a blog, and being a writer is probably my No. 1 career goal.

DD: Where did you come up with the idea to start @FeministTSwift?

CB: I really don’t know. I was walking home from work one day, listening to Taylor Swift, and the idea just came to me. I tweeted the idea, assuming that would probably be the end of it. Except then 20 minutes later I got a phone call from my friend Kevin (@PolitiCarty), and he basically said, “OK, we need to make this happen.” Kevin has been brainstorming with me from the very beginning. He’s the person I go to when I’m not sure if something makes sense from a feminist perspective.

So the idea kind of came out of nowhere. Fun fact, though: Two summers ago was when I first really got into listening to Taylor Swift. That summer was also the summer I interned at NARAL. The fact that it took me another two years to put it all together is pretty frustrating in retrospect.

DD: I love the avatar you chose—Taylor Swift’s face as Rosie the Riveter. Where did you get that?

CB: I actually made that! I wish I’d known how many people were going to end up seeing it, because I would have spent a little bit more time on it. It turns out; Taylor Swift has a headband identical to Rosie the Riveter’s. Obviously, that part was destiny.

CB: I think it’s because a lot of Taylor Swift lyrics can easily be interpreted in an antifeminist way. A few years ago I started listening to Swift a lot—it was the same summer I interned at NARAL, an organization that advocates a woman’s right to choose. I’ve had to deal with a lot of cognitive dissonance being a Taylor Swift fan and a feminist at the same time. Like, “Oh, you’re a feminist but you love listening to this girl talk about how much better life would be if a guy loved her?” and the answer is “Yes.”

Is it just me or is Taylor Swift’s You Belong With Me just a reverse characterization of the Reddit “nice guy”? http://t.co/hjJ8ZJHIdy

It’s also just a combination of two things I really like. For me, feminism and Taylor Swift go together like peanut butter and ramen noodles. Both are great, but you wouldn’t initially think the combination makes sense. But it’s actually awesome.

DD: What has the response been so far? Any haters?

CB: Actually, it’s been overwhelmingly positive. Having a viral twitter account is so affirming! Next time I’m feeling sad, I’m just going to scroll through the interactions on this account, because I mostly find people saying I’m the greatest, smartest, funniest person in the entire universe. That’s pretty nice to read.

Of course, there are the haters. For the most part, I think they’re Swift fans who don’t get the joke and think I’m like, bashing Taylor. It’s a lot easier to cope with when you assume they’re all 15 or something. When you’re 15 and somebody tells you your favorite artist is somewhat problematic, you’re not gonna believe them (#badjoke).

DD: What has been your favorite tweet so far?

CB: “She wears high heels / I wear sneakers / We’re each expressing our gender identities in ways that make us feel comfortable / Date me.”

DD: What is the message you want to send? Does it go beyond twisting pop lyrics into political statements?

CB: This is really supposed to be fun. But at the same time, I wanted to bring to light that a lot of Taylor Swift lyrics and Top 40 lyrics in general are superproblematic on a feminist level. (Again, not hating on Taylor. I think the reason she gets such critique is that she’s one of the few lyricists in the mainstream pop music scene. It’s hard to say “Baby, baby, baby, oooh, like baby, baby, baby oh” is particularly antifeminist, just because it isn’t really saying anything.) The tweets are meant to be funny but there’s some solid truth about how women are portrayed as well.

DD: If there’s one thing you want people to take away from the feed, what would it be?

CB: I want people to realize that feminism can be, like, fun. Feminism is so fun! Everybody assumes feminists are, like, ugly humorless bitches who hate everything. That’s just not true.