Fartners wants to be Twitter for butts and make flatulence social

All the laughter with none of the smell.

In 2015, no subculture is too niche to have its own social network. From Tinder for dogs to Facebook for wives of prisoners, fringe groups have launched their own social platforms like there’s no tomorrow. But with the abundance of inane and superfluous social apps, where does flatulence factor in?

Rest assured, farts are most definitely covered. Introducing Fartners, an app that bills itself as a “social network for your ass.” The platform connects fart fanatics by allowing them to share each time they break wind. Fartners, which uses many of the same design concepts as Twitter, allows users to build a social network around their butts by following the flatulence of their friends.

Currently, the app is only available for Android users, but a newly launched Indiegogo campaign aims to change that. The company wants to raise $10,000 to fund an iOS version of Fartners so everyone can experience the magic of heinie hiccups. 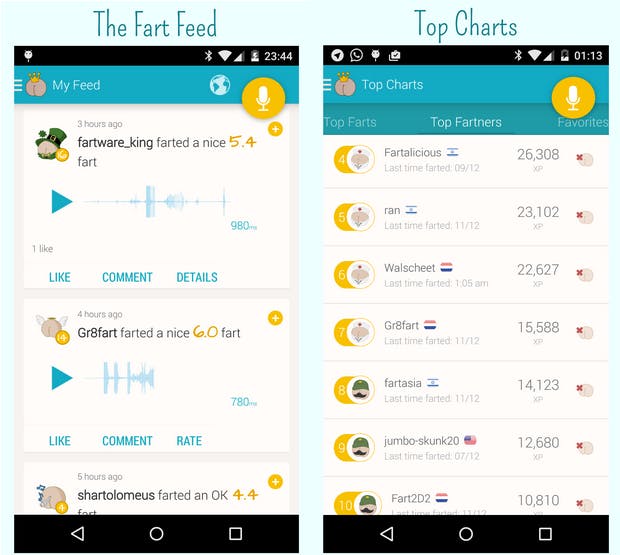 Fartners CEO Rotem Yakir has a mission that’s bigger than just butts. He wants to bridge universal divides through toots.

“We believe that laughing together creates a connection between people, and what’s more universally funny than farts?!” Yakir said. “Whether you’re an American, Russian, Jewish or Muslim, we all fart and it’s always funny.”