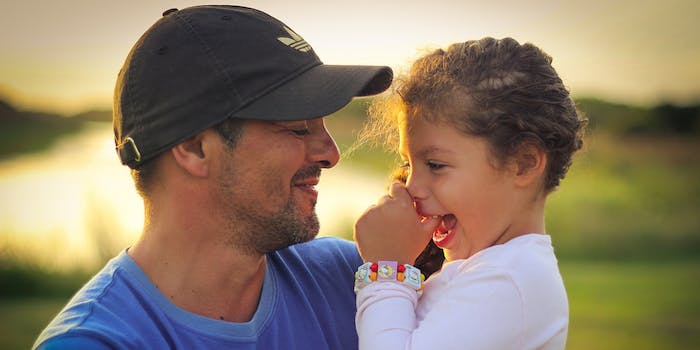 Where do dad jokes come from? 3 funny fathers explain

Everyone wants to get in on the pun.

Dads seem to be everywhere on the Internet. Whether flaunting their distinctive fashion statements or making us cringe at their lame jokes, the meme-ification of the pater familias has been at full tilt for a while now.

And yet a lot of the media attention surrounding dads has been written from an almost zoological POV. While I agree that dads are an exotic species to be studied and admired, this Father’s Day, I thought I’d go directly to the source to ask a few questions about what makes them do the corny, embarrassing, and awkwardly adorable things they do.

Sitting on our dad panel, and submitting to our queries on “dad humor,” we have three excellent writers (and dads), Gabe Roth, Neal Pollack, and Brad Listi.

What is “dad humor”?

Gabe Roth: “Dad humor” to me isn’t all that different from kid humor, truth be told. I think there’s a kid trapped in every dad, and having kids (especially boys) gives you a chance to bring that inner kid to the forefront.

So when it comes to dad humor and making my kids laugh, I seem to revert to the days of fart jokes and such…

Neal Pollack: I think of traditional dad humor as being dorky, dated, and clueless, but I feel like that’s changed in recent years. Sure, dads are dorky, dated, and clueless, but the ones who actually deploy dad humor are pretty good at staying current. We live in a world where all culture is available to all people at all times, so clueless, fat, middle-aged dads really have no excuse.

Brad Listi: It’s humor born of the experiences of being a parent. To be honest, I don’t think about it all that much. Humor is humor. A person’s humor, however it is expressed, tends to be at least partially rooted in his or her personal life. It seems inevitable that some of my own laughs would be generated by the glories and horrors of being a dad.

Have you noticed your humor getting more dad-ish since having kids?

Roth: I don’t think my humor has changed much since having kids. I consider myself a funny person, so I guess I want to expose my kids to the stuff I think is funny. I haven’t changed my comedic POV at all; it’s just been informed with a bunch of new material since having kids.

Pollack: Maybe a little bit, but I try to keep it surprising. The other night, driving my son’s friend home, we all started riffing on how weird religion is, and while I don’t remember any of the jokes, I had the kids laughing.

I actually find that having teenagers around keeps me current, forces me to not be such a fat, clueless idiot. I’m just glad I have a son who also likes mocking Jesus, though never in front of the parents of his friends who believe in Jesus. In that sense, he’s an upgrade over me. I just make fun of Jesus in front of everyone, which is why I never get invited anywhere.

Listi: Sure. Of course. Parenthood is pretty close to all-consuming, especially in these early years. It’s how I spend my time, it’s the stuff of my life, and whatever I’m laughing at tends to be an outgrowth of who I’m with and what I’m doing.  Usually I’m with my wife and daughter, and usually we’re at a kid birthday party, and there’s a bouncy castle and white wine.

Can a dad joke be funny?

Roth: Dad jokes can be funny, of course! But maybe it’s not about the material itself or the joke itself. A dad joke seems to me to be the one that a dad tells over and over again (for decades!) and never tires of. Can’t think of a joke at the moment, but again, it’s not about the joke itself but the longevity and repetition that makes a “dad joke.” [Ed. note: Every single time we crossed the Tappan Zee Bridge growing up, my dad would ask, in a German accent, “Hey, who’s Tappan Zee Bridge?!” It wasn’t funny per se, but his zealous commitment to saying it every time really was.]

Listi: Absolutely a dad joke can be funny, though I would posit that maybe the true test of a dad joke’s worthiness would be if it can make a non-dad laugh. A lot of parental humor can feel like inside baseball—only other dads would appreciate it—and that can get a little tiresome for the childless among us. So hopefully my dad humor, when employed, has a broader appeal. I don’t know. That’s my aim, anyway.

So much of parental humor is situational, anecdotal. Like this morning, for example. My 4-year-old daughter was singing “Edelweiss” on the toilet. She was alone, pooping, and for some reason felt inspired to sing a Rodgers & Hammerstein ballad about an Austrian mountain flower. I’m sure there might be a traditional set-up/punchline joke in there, but with kids the construct is often unnecessary. You just say what happened, or say what was said, and most of the time that’s enough.

What do your kid(s) think of your sense of humor?

Roth: My kids like my sense of humor, for the most part. I get the occasional groan. I don’t dumb things down for them and I rarely censor myself, so I think they find it cool to have a dad who just sort lets it all hang out comedically. My son hates it when I do funny dancing. That he can’t tolerate.

Pollack: My son knows that my sense of humor more or less keeps him in high-speed Internet, which is the only thing he cares about except for snacks, which my sense of humor also pays for, so he’d better like it.

Photo via Damián Bakarcic/Flickr (CC BY 2.0)