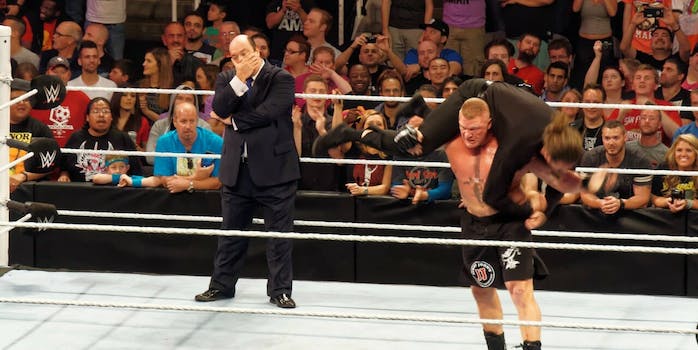 Somebody sign this duo up to be the next tag-team world champions.

When you have young kids and you like watching professional wrestling, it’s almost impossible to resist the temptation of trying out your favorite moves on your offspring.

In my home, the occasional body slam onto the bed or a fake punch to the gut in the kitchen is perfectly acceptable. But the father and son in the video below take the whole fake-pro-wrestling thing to the max. They’re not sticking to basic moves—they’re working at an advanced level, on par with Brock Lesnar’s F-5 and Jimmy “Superfly” Snuka’s top-rope splash.

Check out the mayhem below.

It’s unfortunate that the young kid no-sells his dad’s offense—despite the piped-in announcing—but what are you going to do? He doesn’t yet have the experience to know that that’s part of the business.

Still, huge props to him for having the intestinal fortitude to walk out on the headboard to complete his splash. Even so, you have to wonder if Dad ever showed this video to the kid’s mother.

Either way, great athleticism from father and son. It makes my powerbomb-on-the-bed attempts on my son and daughter look relatively weak by comparison—especially since I haven’t yet begun throwing them through a makeshift table.