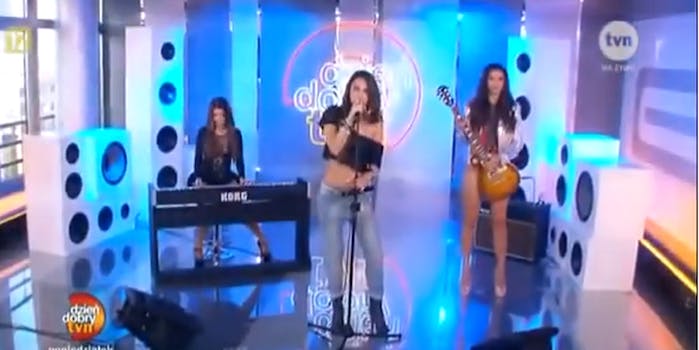 This ‘Playboy’ model has no idea how to play guitar

Sometimes it seems like pop music is little more than bad actors with even less talent than clothing.

Sometimes it seems like pop music is little more than bad actors with even less talent than clothing.

That’s never been more true than in this clip of Polish star Patricia “Patty” Dłutkiewicz performing her new hit “Krzyk” (Scream) on Good Morning TVN. In it, she’s accompanied by two stand-ins, both of whom try rather unconvincingly to pretend like they know what they’re doing.

One woman, identified as former Playboy model Angelika Fajcht, not only forgot to put on pants but neglected to plug her guitar in. She also held the instrument upside-down and didn’t even bother strumming it in rhythm. It’s even more painful to watch than the supercut of Britney Spears’s isolated microphone feed that surfaced once again this week on Reddit.

We expected that the performance will become viral and be controversial, that was the plan from the beginning. It is better to look at beautiful models pretending to play the guitar than ugly musicians who actually play the guitar.

Copies of the video have been already pulled from YouTube and LiveLeak, but I have a feeling this clip will find a way to endure online. It’s the Streisand effect.