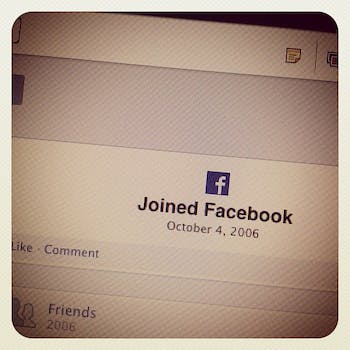 How to turn your Facebook life into a movie

Ever thought that your Facebook drama would make for an excellent movie? Now there's an app for that.

In our heads, most of us are the stars of our own movies.

A new Facebook app called Timeline Movie Maker promises to turn the highlights of your life into a This is Your Life-style mini movie. You’ll need to have Timeline activated on your account in order to use it.

Facebook teamed up with marketing agency Definition6 to create the app, which has been launched on a standalone website. Using it is as simple as clicking the “Make Your Movie” button and connecting your Facebook account to the app, which then takes care of all the legwork. Timeline Movie Maker does require access to some of your Facebook data, including your profile info, content you’ve posted and your email address.

Once your video has been created, it will open with the title “A Glimpse Of Kris Holt” (replaced with your own name, unless it too is Kris Holt). You’ll then be treated to a video not unlike the demo clip Facebook showcased when it first announced Timeline, complete with the same music track.

Your video includes some of the photos you have posted on Facebook, short clips from any videos you’ve uploaded, and pauses for a second on any check ins you have made. It’s a neat little flyover of your Facebook history.

Once you’ve watched through the clip for the first time, you’ll have the option to switch any of the content of yours that’s featured, as well as the accompanying music. When you’re satisfied with your Timeline video, you can share it with your Facebook friends to let them have a one-minute peek at your life on Facebook too.

It is a little surprising that there’s no option as yet to publish the video on YouTube or another video-sharing community, since it would act as a great showcase of what Timeline’s all about and perhaps encourage those who’ve left Facebook over the profile redesign to return and see what they’re missing out on. There’s seemingly no option to download your video either.

For the Facebook community, it’s a way to get a glimpse at our shared social lives. For Facebook, it’s a way to promote Timeline (even though it’s switching everyone over to the new-look profile) and highlight its advantages. While the result has a little less emotional impact than Don Draper’s Timeline pitch, it’s striking to see how much of your life can be summed up in the space of a minute.

“If you have Facebook Timeline, check out this “Timeline” moviemaker. It’s easy and the finished movie makes look like you have your own FB commercial,” comments Gino Montalvo.

I guess we don’t need to fantasize who’s going to play us in our biopics any more. We’re the stars of our own life stories now.