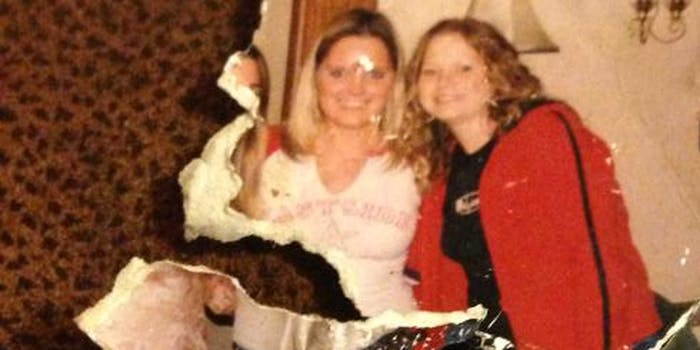 In the wake of the devastating tornadoes that struck Oklahoma, people hundreds of miles away are finding photographs scattered across their lawns.

Scattered across hundreds of miles of Oklahoma plains are photographs ripped from the homes of survivors and victims of the tornadoes that tore a swath of devastation across the state Sunday and Monday.

Strangers stumbling across the photos in their lawns and driveways are organizing on Facebook, trying to reunite them with their owners—or next of kin.

More than 8,000 people have signed up for the group since it was formed Sunday, and the stream of photographs isn’t close to stopping.

Here are a couple over the past hour: 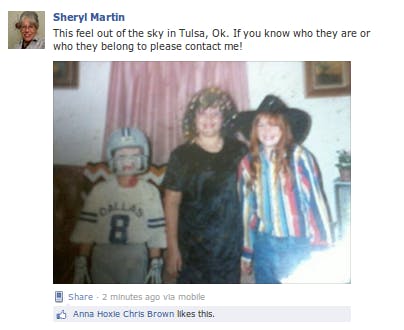 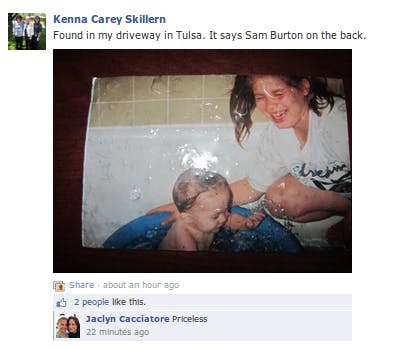 At least 21 people were killed after an F4 or F5 tornado that whipped up winds over 200 miles per-hour cut across the Oklahoma City suburb of Moore Monday. Rescue workers have pulled more than 100 people alive from the rubble. Just a day before, a tornado had touched down in nearby Shawnee, killing two.

On Sunday, Leslie Hagelberg noticed insulation tumbling gently in the wind across her lawn, and by her mailbox was a photograph. It soon dawned on her that these must be debris from the tornado that had just devastated Shawnee, 90 miles away. After learning that many of her neighbors were finding photos, too, she decided to get the word out over Facebook.

People as far as 250 miles away have found photographs belonging to victims of the storm. After the second tornado wreaked havoc in Moore, Okla., on Monday, the group became flooded with even more photos.

To reduce clutter in the busy group, Hagelberg is deleting success stories. But we’ve managed to snag at least one success story before it was deleted: 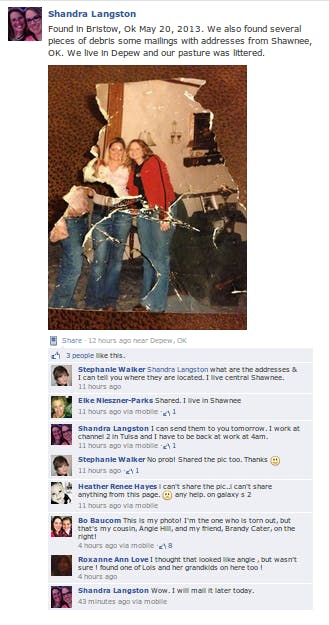 Here’s another saved by the Daily Mail: 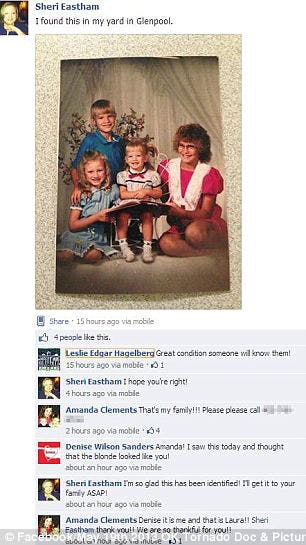