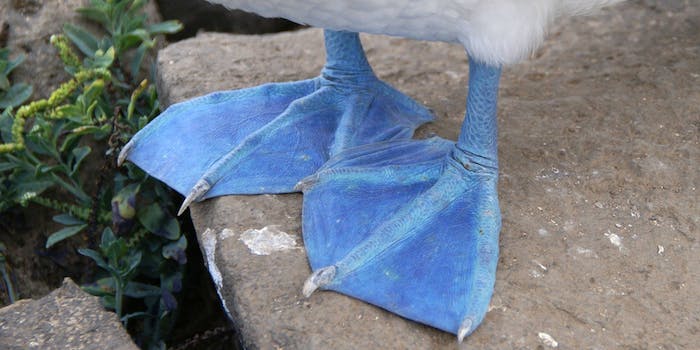 Facebook bans ‘juvenile boobies’ ad for all the wrong reasons

If only terrible jokes were enough to get you banned fom Facebook.

Anyone can make a terrible, innuendo-laced joke about boobies, the googly-eyed birds that awkwardly traipse around the world’s tropical coastlines on giant blue feet. They’re essentially the Uranus of the animal kingdom.

So when Facebook removed an ad titled “juvenile boobies,” we were hoping they were motivated by chivalric devotion to comedic good taste. Nope.

Facebook, which is terrified of breasts in just about any incarnation—even when they’re really elbows—banned the advertisement for “sexual language.” That’s according to the Christmas Island Tourism Board, which also emphasized that they were definitely not trying to boost tourism by click-baiting a bunch of pedophiles.

The group’s marketing manager explained to Travel Daily News, “We have a limited marketing budget so our Facebook campaigns offer us a great opportunity to share the wonderful birdlife on our island.”

Right! Except, as Betabeat’s Jordyn Taylor points out, they’ve happily made the same “juvenile boobie” joke before, in a photo album loaded with the same type of creepy, kiddy-porn innuendo. And then, even when complaining about the Facebook ban, the group can’t stop itself from making the same terrible joke again and again.

By blocking the tourist boards campaign, one of the world’s great eco-tourism destinations is being deprived of its lifeline because someone at Facebook cannot comprehend that a Booby is a bird. Dare I say it, but with so many Boobies to see, it is like all your Christmases come at once.

Christmas Island is starting to sound like a terrible place to visit. I’m already having nightmares of a vacation there, where I’m surrounded by a bunch of locals repeating “lol, boobies” ad infinitum.