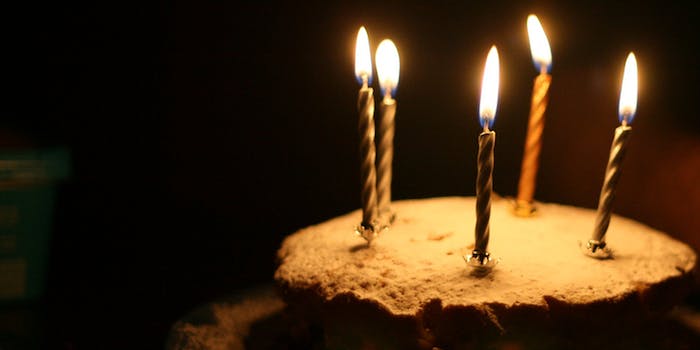 Ah, birthdays—a jumble of dates we once had to memorize, now sorted by Facebook and prominently displayed when we log in. For some, this is the site’s last and indispensable utility. For others, it creates an infuriating web of obligation and hollow sentiment.

Is there a suitable compromise here? Some method for acknowledging the anniversary of a friend’s arrival on earth without feeling like a complete tool? Not quite, but these are a gas.

An Accident of Fate

You may be familiar with the so-called “birthday problem,” an odd rule of probability. It suggests, among other things, that if you group any 70 people together, there’s a 99.9 percent chance that two of them share the same birthday. On Facebook, this means lots of birthday overlap, even if your friend list is a bit sparse.

But why stop there? I also consider which person would win in an mixed martial arts cagematch, or whether the group could work together to survive on a desert island. If there are nine people on the list, guess what—we have a new Supreme Court.

Did you know that it’s actually quite easy to change your birth date on Facebook? Neither did I, until I looked it up just now. This presents a golden opportunity: Wait until someone with a lot of mutual friends has a birthday coming up, and, a week or so prior, quietly edit your Facebook info so that you’re their birthday doppelgänger. Then sit back and watch your buddy fume as you steal his thunder by attracting a slew of messages like “how did i forget today is your birthday lol!” and “thank god facebook reminded me of your birthday, i could have sworn it was in February!” or “hey did you know that you and [person whose birthday you stole] have the same birthday?”

Exercise caution, though: “There’s a limit to how many times you can change your birthday so if you’ve just recently changed it, you may have to wait a few days before you can edit it again.”

A New York writer and editor who will remain anonymous here (for reasons that will soon become clear) prefers to make birthdays into dark, secret crucibles. Every morning she studies the list of alleged friends marking a new year of existence and weighs the importance of each in her current life. If, following careful consideration, she can’t summon a single reason for staying in touch with someone, she cuts the cord forever—it’s a stone-cold unfriending, and afterward she feels only a sense of relief.

“It’s a great way to turn the birthdays of others into my own personal celebration of misanthropy,” she remarks. Best of all, since the unsuspecting birthday boy or girl will be busy fielding Facebook alerts from nicer people, they won’t even notice the jilting! There’s really no better way to break up.

She’s not alone in this culling habit, either. The Daily Mail’s Heather Schmelzlen readily admits that she, too, has been trying to pare down her friends list “without totally nuking”:

I have over 1,000 ‘friends’ and there’s just too much clutter. I usually check the birthdays each day, and if there’s someone I no longer talk to or want to Facebook stalk, I quietly delete them. It’s weirdly cathartic, and I haven’t been called out yet.

Because it’s part of his job to be awesome at Facebook, I wanted to know how the Daily Dot’s own social media editor, Evan Weiss, handled birthday business. Often, he said, it’s an almost sarcastic message copied from last time: “You did it!” When he wants to make more of an effort, though, there’s this tactic: “Sometimes I search ‘happy birthday, [name]’ on YouTube and paste the weirdest video I can find. There are a lot of good ones.”

Of particular interest is a channel called nassirimusic, which collects the panreligious and ultra-positive songs of Fred Nassiri—including 88 versions of the same catchy birthday track, addressed to 88 common names. Perfect for all the Ellens, Michaels, Susans, Davids, Ashleys, Zacks, Ericas, Williams, and Christinas in your busy life.

Pretty much the inverse of “The Old Switcheroo,” this technique is sure to annoy in a totally different way. Sometimes, despite the best efforts of digitized calendars, we forget a birthday. When that happens, bide your time. Wait another three months—at least—then write a birthday message on the forgotten party’s Facebook wall that fails to indicate the belatedness of the post. Even better, tag the person on your own wall in an overly affectionate paragraph and encourage others to chime in with their own sappy comments. With a little luck, your friend will be buried under an avalanche of well-meaning but misplaced birthday wishes, and everyone will think he’s a year older than he is.

The real fun, of course, is in devising your own wacky Facebook birthday tradition. It’s weird enough that we keep count of the number of times our plant has rotated around the sun since someone emerged from their mom’s vagina—so let your freak flag fly!