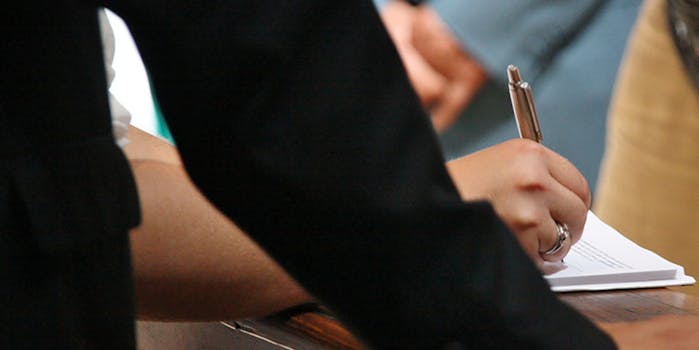 Heath Joynson cheated taxpayers out of more than $1,900.

Investigators rumbled a benefits cheat who insisted he was single after his wife posted wedding photos on Facebook.

Heath Joynson, of Stoke-on-Trent, England, scammed taxpayers of over £1,200 ($1,900) in housing and council tax benefits, claiming in May 2010 he was living alone and out of work. The ruse worked until fraud investigators spotted him signing a marriage register—on his wife’s Facebook account. The local council discovered he lived with his wife, who holds a steady job.

He pleaded guilty Tuesday after failing to notify a change of circumstances affecting his benefit entitlement between Sept. 2010 and January 2011. Joynson, 45, additionally admitted two theft charges, failing to surrender to bail, and neglecting to attend a follow-up assessment after a drug test.

The story gets even sadder from here. Joynson’s wife left him five months ago, after he started abusing heroin again.

Many other married couples have found trouble through Facebook. In 2011, over a third of divorce filings mentioned the word “Facebook,” according to a survey. Last month, a man pled guilty to bigamy after his estranged first wife tracked down photos of his wedding to another woman.