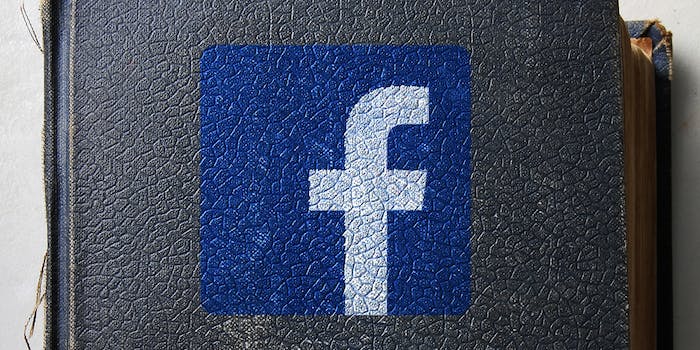 Facebook, the social network that now connects the entire planet and determines via mysterious algorithm whether a person, event, or idea is of any importance whatsoever, wasn’t always an omnipresent aspect of our waking lives. In fact, it only just turned 12 years old today.

What was Facebook like back in 2004? Glad you asked, young whippersnapper. Because the Daily Dot staff is aged enough to recall it vividly.

“Back when Facebook first came out, the site didn’t support actual photos of faces. You had to draw that shit. Suck at drawing? Too bad. But I was the first in my neighborhood to get Facebook, and all the kids in the neighborhood asked to come over and see it. I didn’t let them.” —Miles Klee

“In the early days of Facebook, I could only access it at my local Phoenix library—to get to it I had to walk uphill in the snow both ways. Snow! In Phoenix! It was a crazy time.” —Selena Larson

“Twelve years ago, Facebook used to be pronounced with three syllables (fuh-SAY book), but texting and emoji ruined everything and now it’s just two. I weep for the future.” —Monica Riese

“I still recall the invention of the ‘poke’. We all went out in the streets, tears streaming down our cheeks, and just poked each other, over and over.” —Jason Reed

“The transition from the wall to the timeline? God, that feels like forever ago. It was really hard on my friend Gavin. He resisted for as long as he could; I just pulled the Band-Aid off and transitioned. You can’t hold onto the past. But Gavin clung to the wall. These days I don’t see him around the ‘book too often. And when I do, he’s posting statuses like ‘I miss the old fb lol.’ Let’s have a moment of silence for Gavin. May he rest in peace.” —Eve Peyser

“When Facebook started, your elementary school teachers still had this certain mystique. Then they joined Facebook and you realized they were a little too into 50 Shades of Grey. Now I’m switching careers.” —Aly Keves

“I was friends with George Washington. Facebook used to be a portal to the afterlife.” —Sarah Weber

“The problem with young people today, the reason so many of them spend countless hours in the their parents’ basements slowly pleasuring themselves to videos of people unboxing oversize checks in the exact amount of their student loan debt instead of getting stable jobs as unionized plumbers with large enough salaries to entirely support a family of four, is the Facebook News Feed’s endless parade of positive reinforcement. Back in my day, there was no News Feed. There was only a profile you obsessively crafted to be a perfect representation of your ideal self. Now, every time someone posts a picture of the whatever crap they cooked with Blue Apron that night, it’ll get 30 likes—even though every other Blue Apron subscriber on the planet made the same meal the previous night, so it’s not something to actually proud of. It gives young people the feeling that they’re special just for existing instead of showing them what the real world is like: a bleak wasteland of all-against-all where the only certainty is that the strong are rewarded by their creator with earthly success and the weak are left to complain about the meager scraps they should be thankful fell from a job creator’s table. People who don’t understand history are doomed to repeat it, and Facebook “likes” are nothing more than second coming of the meaningless participation trophies handed out to everyone for playing little league soccer, which, as anything thinking person will tell you, is single worst thing to ever happen to Western Civilization. If only someone would take away the Facebook News Feed, it would, in one fell swoop, make America great again. Also, please share the last article I posted.” —Aaron Sankin

“I miss throwing penguins and snowballs and cake at people. That was what got me on Facebook in the first place… I think.” —Rachael Berkey

“Facebook was actually created in Berlin in 1942 so that Nazis could communicate with their families and friends back home. It was called Fascbuch!, but the company decided to bastardize the name for its American launch in 2004.” —Anonymous Nazi

“In the very beginning, if you wanted to get your dick sucked via Facebook, you had to send a bumper sticker that said ‘suck my dick.'” —Gabe Bergado

“There was a support group for people who went out of their way to step on that extra-crunchy leaf. It felt good to know there were people out there who shared your strange addiction. If you were having a hard day, you could log on and know there was someone else who’d missed several classes just wandering out of the way to step on crunchy leaves—you weren’t alone in your pain. It felt like a community. The new Facebook has GIFs and sticker comments, but if you peel back the stickers it’s a dark and lonely place.” —Nayomi Reghay

“Before Facebook launched, there was no way to tell what happened to your old friends from high school—aside from stalking them. I was good at it.” —Austin Powell

“The status update bar didn’t prompt you with ‘What’s happening’ or ‘How are you feeling’ or anything like that. It was just an empty box. We didn’t know what to fill it with. I ruined two monitors trying to put honey in it.” —Kevin Collier

Photo via Ben Hosking/Flickr (CC BY 2.0) | Remix by Jason Reed