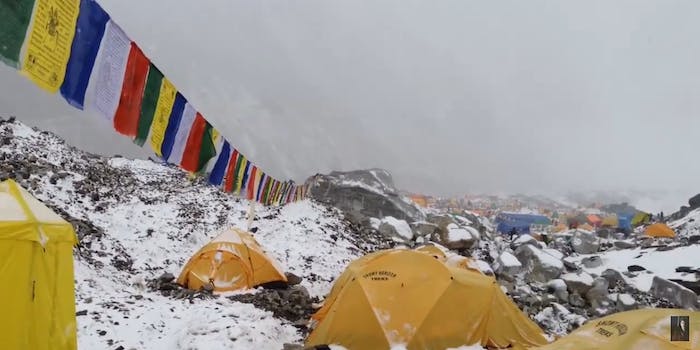 This video is a mountain climber's worst nightmare.

The Nepal earthquake has already taken thousands of lives, including those of several mountaineers killed by an avalanche at Mount Everest‘s base camp. A newly discovered video shows the terrifying speed of the disaster, with climbers spotting the ground shaking just seconds before they’re engulfed by a wall of snow and ice.

German climber Jost Kobusch happened to be filming just as the avalanche hit, and the resulting video is a mountain climber’s worst nightmare. Kobusch and the people nearby survived relatively unscathed, although you should be warned that there’s some understandably strong language in the video.

At least 18 people have died as a result of the base-camp avalanche, while 61 others were injured. Rescue helicopters have been sent out to track down the many climbers who were elsewhere on the mountain during the earthquake, although these efforts have been hampered by the high-altitude conditions and a series of smaller avalanches triggered by aftershocks.