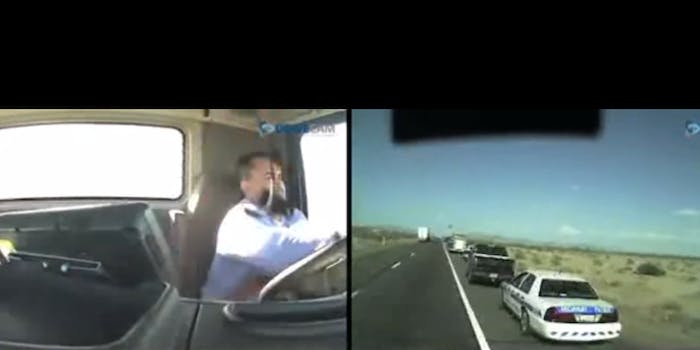 A truck driver killed a policeman when he crashed into three cop cars and two fire trucks parked alongside an Arizona highway in May. He recently came under additional fire when it was discovered that he was using his phone to look at scantily clad women posing provocatively on Facebook.

News of the development came Thursday, after the Arizona Daily Star obtained dashboard surveillance footage of Espinoza at the exact moment that he began to crash into the vehicles. Espinoza was going 65 mph at the time, and though his cellphone is blocked from the camera by the placement of his wallet, you can see a Samsung Galaxy 3 phone fly out of his hand when everything starts to go haywire.

A police report suggests “Espinoza would have been able to perceive the danger … if he had not chosen to distract himself while accessing Facebook from his cellular telephone while operating his assigned commercial vehicle.”

Espinoza has been charged with second-degree murder, though he’s pleaded not guilty.