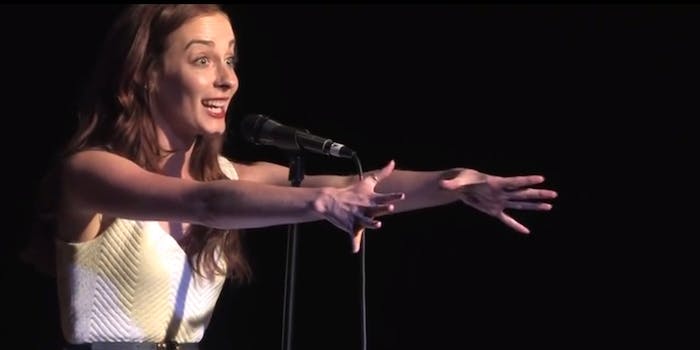 Brenna Twohy's "Fantastic Breasts and Where To Find Them" is an inspiring but problematic celebration of female sexual desire.

This article contains adult topics that may be NSFW.

In the poem, which was performed at the National Poetry Slam in Oakland, Calif., last week (the title is a play on Fantastic Beasts and Where to Find Them, J.K. Rowling’s 2001 book about the magical creatures in the Harry Potter universe), the Portland-based poet waxes rhapsodic on her favorite type of pornography: Potterotica.

And let’s not even talk about the fact that much of the allegedly progressive, sexually empowering fanfiction on the Internet is a helluva lot more misogynistic than Twohy’s poem suggests. While my coworker Aja Romano, who covers fandom, is careful to emphasize that “fanfiction as an empowered space for female fantasy is hugely important to fandom writers,” she notes that the reality is far more complex than Twohy’s poem would suggest.

“Fantastic Beasts and Where to Find Them” is a stirring celebration of a specific type of female sexual desire. But it’s troubling that, in celebrating one type of erotica, Twohy feels compelled to condemn another.