What is the English Defence League, and why is Anonymous after it?

There have been 200 Islamophobic incidents reported to police since the killing of Drummer Lee Rigby.

The English Defence League is a far-right, underclass, whiter-than-cave-dwelling-mayonnaise-on-mashed-potatoes supremacist group and a  powerful political force in the U.K. Its members are what the English themselves call “yobs.” In the past week it has held marches in different U.K. cities to protest the murder of Drummer Lee Rigby one week ago, laying the blame for the murder squarely on Islam and immigrants rather than the two British residents who took responsibility for the crime.d

The Guardian reports that there have been 200 Islamophobic incidents reported to police since the killing, and that 13 arrests were made at the EDL demonstration in London. That, then, is the English Defence League. 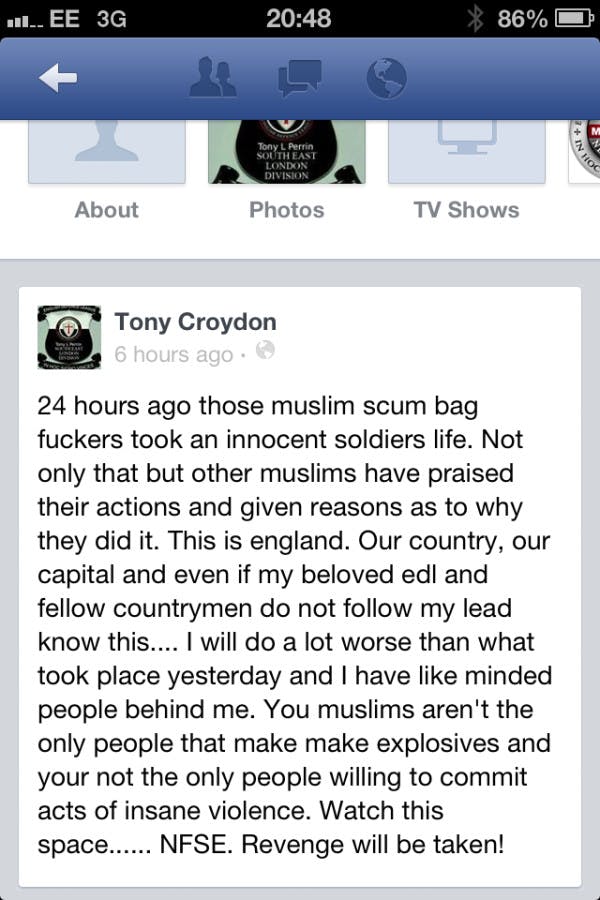 Now it has to defend itself from Anonymous.

With 98,843 views in two days, that video is the rallying cry of Anonymous’ #OpEDL.

Our people are desperate for hope, in a hopeless society where our own government neglects us, where society has failed us, it is only natural to seek a relatable change maker. This sort of desperation, this quest for feeling of worth, is what you have taken advantage of.

In this operation, we will begin the systematic and comprehensive desiccation of your cult. We will further expose your falsities and your attempts to censor, to your members, to the British public, and to the world as a whole. You will fall, we can say this with complete confidence. We are everywhere, you cannot hide, you cannot win We are the voices of all and the voice of one. It will not happen over night, but we WILL be victorious.

We do not forgive.

We do not forget.

#OpEDL aims to give to the EDL the reputation Anonymous thinks it deserves, by bringing that reputation into the homes, workplaces, schools, cellphones, and Twitter and Facebook accounts of the members and donors. Many people find the idea of being held to account for Nazi salutes at U.K. war memorials, requesting sexual favors from 15-year-old girls, and yelling “send the black c**ts home” at rallies somewhat disconcerting when suddenly the public can call you up and tell you what it thinks about that.

In retaliation, EDL supporters have been posting anti-Islamic comments on the video and have managed to get the main Twitter account of the operation suspended.

In an ongoing series of doxes on Pastebin and AnonPaste, Anonymous members have listed the contact details for approximately 300 EDL supporters and donors. Gathering the information was not as hard as it might have been, because the EDL donor list is publicly available at the Electoral Commission website (Update: It’s been removed).

Additionally, the EDL were previously doxed and attacked by the Pakistani ZCompany Hacking Crew and their offshoot TeaMp0isoN in 2011 and 2012, and the current doxes build upon those old contact details of over a thousand EDL supporters, allegedly obtained by hacking the official EDL forum and website. ZHC had exploited a weakness in Facebook to interfere with EDL pages and profiles, but that wasn’t necessary this time, as the EDL themselves have taken their pages offline in response to the doxing. Many names recur in the old TeaMp0isoN dox and the new; guess there’s not much turnover in white supremacist groups.

Poster Subsplot on the AnonUK forums has this to say: “Truth is the content posted so far is all data-mined info from the public domain. Part of it is Team Poisons hacks, the rest is info that’s been collated by some very careful watching of the EDL over the last couple of years. So far they seem to have got nearly every member who has earnt themselves a bit of a rep for being a general douche and bigot.”

If true, that means that all the information in the doxes can legally be published, an assertion Anonymous itself makes more and more regularly as it comes to realize most media organizations will not link to doxes.

Various supporters of #OpEDL have also been bird-dogging individuals in the group, tweeting allegations, making mocking screenshots of Facebook events that include the warning to members to “Keep it off Facebook,” and other similar behavior. On Friday night, Shmoop, member of the notorious troll organization Rustle League and former member of UGNazi, claimed to have seized control of a number of EDL Twitter feeds, although that, predictably, turned out to be a troll.

The U.K.-based Register reports a store selling EDL clothing had its site hacked and taken offline as well. But God (whichever one you believe in) have mercy: Nobody but nobody wants to see those guys naked.