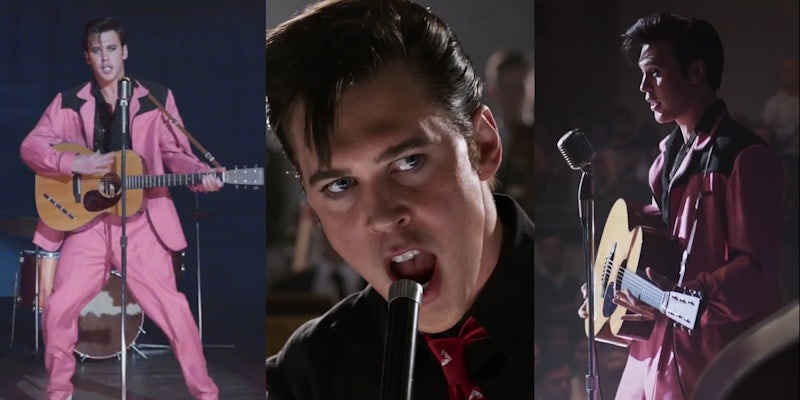 They're especially pointing out his relationship with ex-wife Priscilla.

Baz Luhrmann’s maximalist Elvis Presley biopic is now out in theaters, a film that enticed audiences enough to send it to the top of the domestic box office. And while no biopic is ever truly able to capture every part of the person it’s depicting, people on TikTok are taking aim at Elvis for many of those discrepancies, sometimes in response to official Elvis promos.

On TikTok, Warner Bros. has been heavily promoting the film and star Austin Butler—a 30-year-old actor on the rise—with a variety of clips from the film. One of those TikToks, posted on June 9, encourages viewers to “#DuetThis with your own iconic moves.”

You might expect the clip to incorporate some of Elvis’ iconic dance moves or even a hit song or two to get people dancing. But instead, the 10-second clip shows Elvis talking to someone about how people used to hate his dance moves.

“Back when I was starting out, some people wanted to put me in jail,” Elvis explains. “Even kill me for the way I was moving.”

The sound, whether you include the scene at hand or just Butler’s dialogue, isn’t exactly a great prompt for a TikTok duet. While All Elite Wrestling’s TikTok posted a rather amusing reply by imposing wrestling footage over the scene, many of the responses involved ironic dance videos or criticism of Butler’s voice. One popular video duet showed TikToker tranganhdong repeatedly asking if people wanted Elvis jailed “because you were pursuing a minor.”

The comments are in reference to Elvis’ ex-wife Priscilla Presley, who Elvis first met in 1959 when Priscilla was 14 and he was 24; they dated while she was in high school and would marry in 1967 when he was 31 and she was 21. By today’s standards, their relationship would’ve been highly inappropriate. Even back then, Priscilla’s father threatened to get Elvis charged with “taking a minor across state lines for sexual purposes” under the Mann Act if he didn’t marry Priscilla. They had one daughter, Lisa Marie Presley, and they divorced in 1973. While Priscilla (played by Olivia DeJonge) is in Elvis, one review of Elvis says that Elvis “side-steps” the age-gap aspect of their relationship. But TikTok has been bringing the Priscilla conversation back to the surface for months.

People also pointed to just some of the circumstances of his death, which have been both the subject of conspiracy theories and much interest.

Some of those videos come up while using Doja Cat’s song from Elvis.

“This song alone sent me into a research spiral about Elvis’ life and his INSANE food/health choices in the years leading up to his death,” one TikToker wrote. “His PR team is elite wtf… like how do we never talk about this stuff???”

Many of the darker aspects of Elvis Presley’s life were previously known. You can find it on Wikipedia, in biographies on Elvis’ life, and via comments from people who knew him; Priscilla even wrote about her relationship with him for People magazine in 1985. But, in the wake of a glitzy biopic (if only in style), it’s giving an entirely new generation of viewers a window into the parts of a legend’s life that didn’t make the final cut.