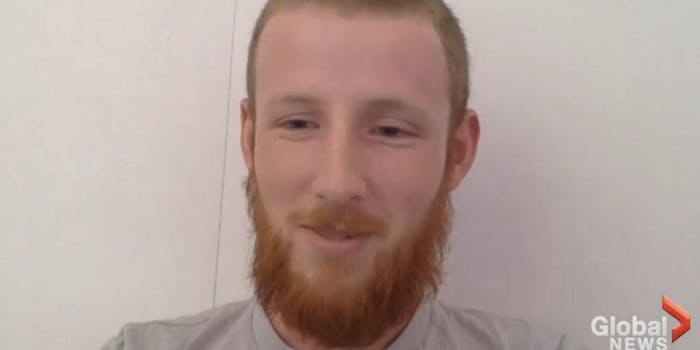 Meet Ian Dalsin, a man of his word.

Above is the face of a man who has literally eaten a hat.

This is Ian Dalsin, a 24-year-old Canadian citizen presently living in England. His friend, Thomas Dang, was running for office back home in Alberta, so Dalsin lent his support by taunting him via social media.

“If Thomas Dang becomes [a Member of the Legislative Assembly],” Dalsin wrote on Facebook, “I’ll literally eat my hat.”

Not only did Dang win, he was part of Canadian political history—as one of 53 New Democratic Party candidates to be elected to the legislature, this election brought to end the Progressive Conservative’s 44-year-long reign in Alberta. Oh, and at 20 years old, Dang is the youngest MLA ever.

Dalsin says Dang was the first to remind him once election results were confirmed. Dang texted Dalsin, “I hope you have a good hat.”

As it turns out, Dalsin did not have a good hat. He responded by making a video showing him shopping for—and then eating—a cap of his choice.

Let this be a lesson to everyone who insists on using the word “literally.”