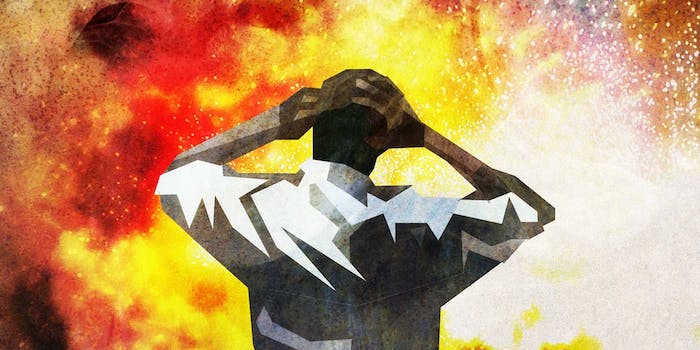 The problem with calling Dylann Roof a ‘terrorist’

Dylann Roof is a monster—but don't call him a 'terrorist' until we decide what that means.

According to survivors, Charleston shooting suspect Dylann Roof, 21, walked into the doors of the Emanuel African Methodist Episcopal Church in Charleston, South Carolina on Wednesday night. After sitting down with a prayer group for an hour—among them a librarian, state senator, and a mother of three—he apparently turned to the churchgoers and told them: “You rape our women, and you’re taking over our country, and you have to go.” Then he allegedly opened fire and killed nine innocent people.

But in the painful aftermath, I would argue that we should not be calling Roof a terrorist.

The 2,500-word manifesto authorities believe Roof left behind is eerily similar to the sentiments of Osama Bin Laden’s motive for the September 11 attacks.

I have no choice. I am not in the position to, alone, go into the ghetto and fight. I chose Charleston because it is most historic city in my state, and at one time had the highest ratio of blacks to Whites in the country. We have no skinheads, no real KKK, no one doing anything but talking on the internet. Well someone has to have the bravery to take it to the real world, and I guess that has to be me.

And thus, if found guilty, Roof meets all the requirements for a standard terrorist: writing a disturbing manifesto proclaiming racist vitriolic appreciation for black oppression, his Facebook profile photo showing him proudly wearing patches of the South African apartheid on his jacket, and his racial motive leading him to massacring nine members of the Emanuel AME community.

But let’s make this clear: If Dylan Roof were a black teenager killed by a cop, cable news might be quick to call him a “thug.” And problematically, if his name was “Ahmed,” I’d argue the narrative drummed up by the public would emphasize what had happened in Charleston as a “terrorist attack.” But should Dylann Roof be labeled a terrorist? I don’t know.

There is no legal set definition of terrorism. The Federal Bureau of Investigation defines “domestic terrorism” with three characteristics: “involve acts dangerous to human life that violate federal or state law, appear intended to intimidate or coerce a civilian population, and occur primarily within the territorial jurisdiction of the U.S.” The Merriam-Webster dictionary further defines terrorism as “the use of violent acts to frighten the people in an area as a way of trying to achieve a political goal.”

The 2,500-word manifesto authorities believe Roof left behind is eerily similar to the sentiments of Osama Bin Laden’s motive for the September 11 attacks.

The PATRIOT Act has a definition a little more specific (yet still vague, if that’s possible) with the definition of “terrorist” as a person or group “threatening, conspiring or attempting to hijack airplanes, boats, buses or other vehicles” or to commit acts of violence on an any ‘protected’ persons, such as government officials.”

The definition of “terrorism” is so vague and loaded that respected news outlets like Al-Jazeera and Reuters avoid using the word altogether—and for good reason. Our current political cultural is so polarized and trivialized that a simple word like “terrorism” contains intense, loaded emotions often used to destruct any rational debate. The famous phrase states that one man’s terrorist is another man’s freedom fighter. And as Roy Peter Clark, Senior Scholar of the Poynter Institute, pointed out, language can be used as a weapon in an ideological war.

Beyond the usage of “terrorism,” the differential treatment and personification of brown or Muslim gunmen provide a stark contrast compared to their white counterparts. Minutes after news broke out of the shooting, commentators had described Roof as someone who is “mentally ill.” Unlike the characterization of Michael Brown by the New York Times as “no angel,” Roof hasn’t been called a “thug,” although he faced charges of alleged drug use before the Charleston shooting.

This isn’t new or without coincidence. In February, three young Muslim students were shot execution-style in their own home in the suburbs of Chapel Hill, North Carolina. Although the suspect’s Facebook page featured anti-theist rants against Islam, and previous altercations with the victims showcased his public disdain for Muslims, law enforcement made the call as a “parking dispute” and the suspect was described as “mentally ill” and “believes everyone as equal.”

So it would make sense for members of the Muslim community to be outraged and question why Dylann Roof, the suspect of what certainly appears to be a hate crime, hasn’t been labeled as a “terrorist” by media networks. There’s no denying that there’s a double standard when it covering shootings when done by a white non-Muslim gunmen, but by pressuring networks to call Roof a “terrorist,” they are legitimizing the fetishized propagandistic use of “terrorism”  as it is stereotyped against brown and Muslim communities.

The definition of “terrorism” is so vague and loaded that respected news outlets like Al-Jazeera and Reuters avoid using the word altogether—and for good reason.

As the Intercept’s Glenn Greenwald notes, “terrorism” is a word that holds no meaningful merit but yet is able to invoke fear and anger as a stronghold for public support. It legitimizes the irrational fear-mongering language used to beat the drum for war, send more young American kids off to die, and drive up public support on the use of predator drones that have killed far more children and innocent civilians in the last eight years than ever before.

It arguably legitimizes the invasive and counterproductive counter-terrorism policies that have tyrannized black and Muslim communities for decades. It takes the limelight away from the long history of terrorism—defined as it is colloquially—used against black communities by the United States government.

So, is Dylann Roof a terrorist? I believe so. But before we rush to label any action—whether it’s enacted by a lone cell or a group—it’s time for the American people to have a serious discussion on how terrorism should actually be defined. We owe it to the victims of our endless imperial conquests in Iraq, Afghanistan, Libya, and Pakistan. We owe it to the many communities of color suffering through state-sponsored violence. We also owe it to ourselves.

Sarah Harvard is a politics and world news reporter. She likes covering Islam, U.S.-Middle Eastern relations, identity politics, and elections. she serves as the unofficial public defender for Kanye and Kim Kardashian West on the Internet and does a great impression of Kathy Griffin. She has previously written for Slate, Huffington Post Politics, and Al-Jazeera English.