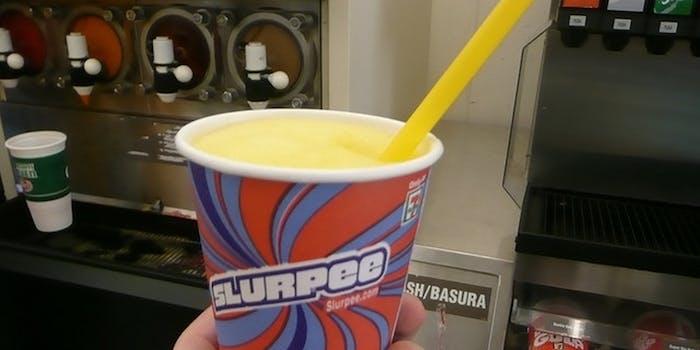 Drunk genius asks Craigslist to deliver him a 7-Eleven Slurpee

What if you needed a Slurpee from 7-Eleven nearly as badly as you needed the oxygen that was coursing through your windpipe? The kind of longing you only feel when all the liquid has evaporated from inside your body, and the only way to live—the only way to survive, damn it—is to have a nice, long cool drink of that frozen goodness. Forget the brain-freeze that’s sure to come and knock you off your feet and into a comforting bed made of goose feathers, Egyptian cotton, dextrin, erythritol, and Yellow 7. No matter the pain it puts in your head, Slurpees are essential to life.

But there’s problem: What if your Slurpee need was pressing, but you had no way to procure the heavenly beverage because you were too drunk to drive? How could you overcome the devil of intoxication in order to feast on the nectar of the convenience store gods if your chariot of horsepower was rendered useless by a spike in your blood alcohol content?

It’s easy if you’re a gentleman of foresight and a maven of problem-solving. You turn to Craigslist. Just like this upstanding (and responcible) man of honor did, in a post that will echo through eternity:

Forgive the spelling errors. The man was in need of his fix, and either he was careless with his keyboard while spelling out his desperation, or he was trying to be funny.

Regardless, here’s hoping the guy got what he craved the most. Because the only thing better than stepping into a 7-Eleven in order to pour yourself some of that icy goodness is having someone deliver it directly to your thirsty gullet.

Photo via Lauren Siegart/Flickr (CC BY 2.0)