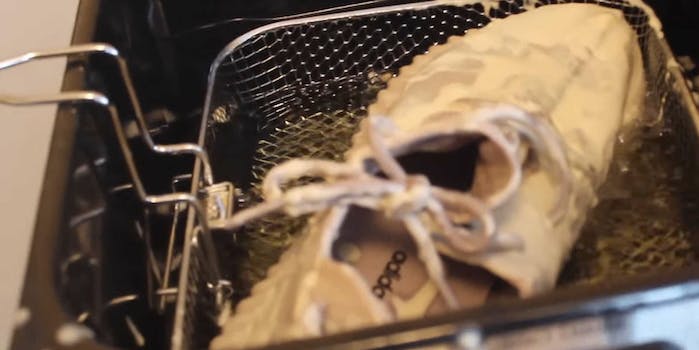 For some reason, our marble-mouthed, gum-chewing, Complex-reading hero owns a deep fat fryer, and, because he is “feeling it,” has decided to smother his Yeezys in batter and drop them into boiling hot oil.

“One thing I want to mention, even though I’m keeping these, this is a waste of shoes,” he says, with a straightforward earnestness that could almost be heartbreaking if it wasn’t so dumb.

I’m obsessed with this video partially because I love to see Internet bros doing Internet bro things, but also because it’s a pure artifact of the human condition. We want to be heard. We want to be written up on websites like the Daily Dot. The idea of some guy frying a pair of expensive Twitter-famous boots has existed in our heads forever. We could predict it from the beginning. This sort of senseless, directionless, contextless, satire-less behavior is profoundly normal. There are kids on the Internet right now who are thinking “Man, I wish I did that first.”