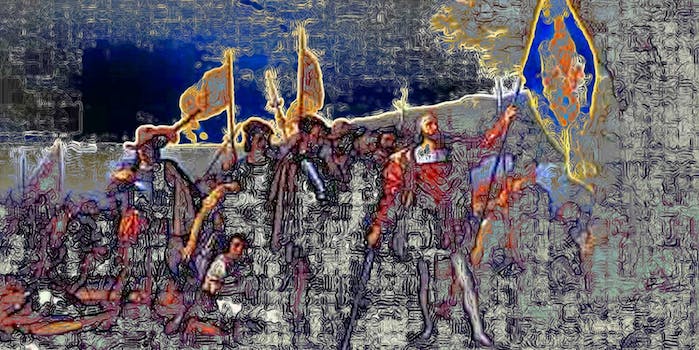 Our most controversial national holiday is once again upon us: Columbus Day, the celebration of the historical contributions of Christopher Columbus, the 15th century explorer popularly misstated to have “discovered” America. The divide between his apologists and critics couldn’t be any greater—there are many Americans who still regard Columbus as a veritable hero and inspiration, while countless others see the holiday as a shameful paean to America’s history of genocide, slavery, and colonialism.

You could be forgiven for not knowing much about Columbus’ failings—because grade school textbooks have proven not very keen on emphasizing his role in enslaving the native peoples of the Americas. As Bill Bigelow detailed for the Huffington Post, Columbus’ brutality toward the Taino people is particularly grisly—from selling them into slavery to butchering them for failing to provide him enough tribute gold. It’s impossible to reconcile these facts with the cartoonish image of the slightly confused explorer that we all honor by giving the kids a day off school, and it’s time to admit his critics are right. Don’t #RethinkColumbus, as Twitter users are suggesting. It’s time to drop him altogether.

If much of what we learn about history in Elementary and Middle School is based off myths and outright lies, the life and times of Christopher Columbus offers a compelling case study. For example, you’ve probably heard the old line about Columbus stunning the European establishment and the scientific world by proving the Earth was round—rather than flat—right? Unfortunately, it’s an inane and easily debunked story, as the Washington Post’s Valerie Strauss noted the curved surface of the Earth was well known by the mid-15th century.

You could be forgiven for not knowing much about Columbus’ failings—because grade school textbooks have proven not very keen on emphasizing his role in enslaving the native peoples of the Americas.

And Columbus himself wasn’t even the first European to have visited the New World. Norse explorer Leif Ericsson visited the continent 5oo years before (naming the site he landed on “Vinland”), and Bjarni Herjólfsson spotted the strange territory even earlier than Ericsson—although he did not dock on North America’s shores. Even Columbus didn’t think he had done something that would wind up being mindlessly taught to schoolchildren. “ He never believed he had landed somewhere that Europeans weren’t otherwise aware of,” the Washington Post’s Kris Lane explains. “Columbus thought he was discovering some parts of Asia not described by Marco Polo or other Western authorities.”

If American schools were more willing to educate about the real horrors Columbus visited upon the indigenous peoples of the Americas, it’d be easier to forgive a few tall tales on the subject. And teaching his real, usually ignored legacy in schools is expressly important because of what the murder of indigenous people and slavery meant for the development of the United States. These practices were the same two evils that—for all intents and purposes—built America, which makes the government and the American people’s stubborn insistence on celebrating him all the more unforgivable. He might not have been the father of our country—but he’s absolutely the father of our genocide.

The human beings who had their lives invaded and shredded by Columbus’ involvement, through disease, violence and slavery alike, should be respected and remembered with clear-eyed, unapologetic honesty. Their descendants shouldn’t have to watch the world lionize him.

Despite the deaths of millions of natives, Columbus Day does have its supporters. Perhaps the most prominent example is the appropriately named “Knights of Columbus.” It’s the largest Roman Catholic fraternal order in the United States right now, boasting a membership 0f 1,883,598 men, according to their website (and, yes, the organization is exclusive to men). The Knights are who helped make Columbus Day a national holiday in the first place—as the group lobbied Congress to get the holiday approved back in 1934. It was ultimately made official by President Franklin Delano Roosevelt’s signature.

However, the Italian-American lobby group’s interest in Columbus isn’t merely an issue of nomenclature. There’s a tricky cultural side to the issue, as well: Columbus Day has become tightly intertwined with Italian heritage in the U.S., who are largely at the forefront of the Columbus Day parades thrown every year across the country. New York City boasts the largest, with around 35,000 marchers each year, and on the Columbus Citizens Foundation website, the group explains that the parade “celebrates the spirit of exploration and courage that inspired Christopher Columbus’s 1492 expedition.”

Columbus himself wasn’t even the first European to have visited the New World.

As a person of Italian descent, I can only say this: There’s not a party or parade on Earth that’d get me to celebrate in that guy’s name. There are countless Italians throughout history who deserve the respect and admiration doled out to Columbus each year, and if these celebrations are popular, they are just as widely protested. The groundswell of animosity toward the parade was so great in 1992 that Denver’s procession had to be cancelled—but this year, peaceful protesters showed up with signs like “1492: Disgrace Called Discovery” and “Sitting Bull would be proud of us.” “Why do people have to treat Columbus like a god?” one protester told ABC News. “We don’t have our own day, and we were here first.”

It’s, however, reassuring that that many cities throughout the country are changing the conversation—by finally stepping up and rejecting genocide apologism. Cities like Berkeley, Portland, Albuquerque, and St. Paul—among others—have swapped out the controversial Columbus Day holiday in favor of “Indigenous Peoples Day.” With any hope, more cities will follow suit—as well as the U.S. government itself. If our nation isn’t willing to grapple honestly with its original sins, we are all doomed to repeat the same mistakes.

Photo via GarlandCannon/Flickr (CC BY SA 2.0)