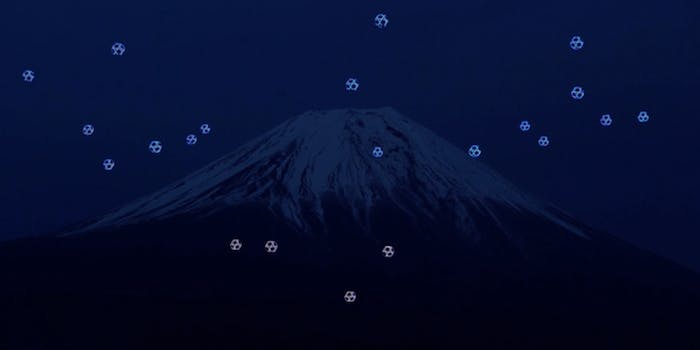 Drones dancing around Mt. Fuji are both terrifying and beautiful

Something can be both beautiful and terrifying at the same time, right? Take these drones dancing in the night sky as an example.

Part of Sky Magic’s “Drone Ballet,” more than 20 flying machines danced around Mt. Fuji in Japan. The drones illuminated the night sky with more than 16,500 LED lights while synchronized in flying swarming formations. All of this was accompanied by Shamisens, the Japanese traditional guitars, being played on the ground.

As Gizmodo points out, these drones look eerily similar to the aliens from the classic video game Space Invaders or something ominous you’d see plummeting toward Earth in a sci-fi movie. Part of me wants to grab a blaster and take these guys out of the sky before they get too close. But the other part of me is totally mesmerized by the dazzling colors and movements. It really does feel like a ballet, and I’m all for this futuristic, technologically-driven dance.

Now we’re just waiting for these drones to get down to Beyoncé’s “Formation.”