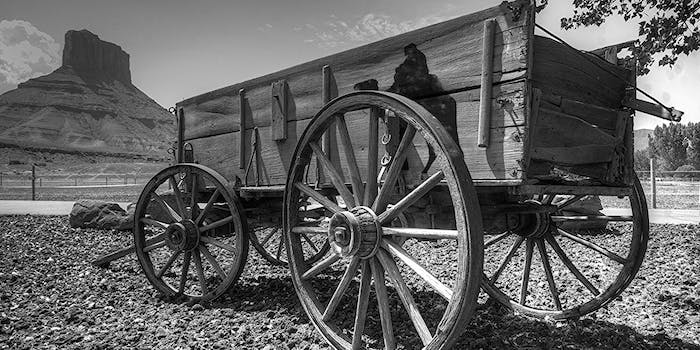 The Internet has its own version outlaws, and it's unclear if they're idealistic heroes or mere criminals.

How do you feel about Billy the Kid? Was he a hero? Or a common criminal?

Billy the Kid and other legends of the Wild West appeal to us because while they may not be heroes, they also weren’t mere criminals. They were outlaws and as such their crimes were about more than profit. At least in the popular consciousness, they were idealists.

Ross William Ulbricht is such an idealist for the Internet age. Better known online as Dread Pirate Roberts, he was allegedly the founder and owner of Silk Road, the Web’s largest anonymous marketplace, which specialized particularly in the sale of illegal drugs. According to Ulbricht’s arrest record, in the two and a half years that Silk Road operated, it facilitated more than $1.2 billion in transactions, netting Roberts an estimated $80 million.

Roberts, as the owner-operator of the Internet’s biggest black market, had a big platform, and he made Silk Road about more than just getting high. “Silk Road is about something much bigger than thumbing your nose at the man and getting your drugs anyway. It’s about taking back our liberty and our dignity and demanding justice,” he wrote in an essay about a year after launching Silk Road.

Before Silk Road launched, Roberts’s real-world alter ego, Ulbricht, though cagey about what he was actually doing, described his secret project in no-less high-falutin terms. On his LinkedIn profile he wrote that he hoped to “use economic theory as a means to abolish the use of coercion and aggression amongst mankind.” And, “I am creating an economic simulation to give people first-hand experience of what it would be like to live in a world without the systemic use of force.”

Interesting that he should describe his black market as an act against systemic aggression. The FBI accuses Roberts of ordering at least two murders—in one case hiring an undercover FBI agent to torture and murder a vendor that Roberts believed was stealing from Silk Road.

Was Roberts an idealist carried away by events? Or was he always just a cheap huckster, using high-mindedness to dress up what was nothing more than a win-at-all-costs scheme to make money?

The Silk Road tried briefly offering a marketplace for weapons dealing called the Armory. The effort was short-lived because users found the direct selling of instruments of violence to be too dissonant what they saw as Silk Road’s peaceful mission of selling drugs.

Cody Wilson, however, has found fame, if not fortune, in designing and sharing plans for the world’s first 3-D-printed weapon and wrapping it all up in libertarian rhetoric that has a certain resonance with Roberts’s statements.

In case you aren’t already familiar with ‘the Liberator,’ all you have to do is download Wilson’s files, feed them into your 3-D printer, and you’ve got a plastic handgun, just add bullets and firing pin.

Wilson, a former law student, created a nonprofit called Defense Distributed and posted his designs on Deep Web file-sharing sites. At just one site, the designs have been downloaded at least 100,000 times.

Gun ownership has become a symbol of freedom for many. After all what would Billy the Kid be without his trusty six-shooter? Wilson is no exception, and he’s taken the symbol a step further than most.

“Imagine if you want social change and radical change but you don’t believe you can vote for it,” Wilson told the Daily Dot. “And if you can create the world you imagined, well so much the better.”

In other words, in Wilson’s view, his gun, called the Liberator, is not merely a symbol of freedom. It is actually an instrument of change.

The name of Wilson’s gun, “Liberator,” is a reference to a handgun the Allies built in WWII to drop behind Nazi lines.

Now, more than ever that reference is guaranteed to twist the knife. Cries of “Freedom” are always guaranteed to resonate, especially with an American audience. But today, as we are shocked by one revelation after another about the United States government’s spying on its own citizens, the comparison to the Nazis—while still ridiculous—is less ridiculous than it has been since J. Edgar Hoover died.

The Internet is frequently compared to the Wild West. We love it for the same reason people were attracted to the West: the wide, open spaces; the opportunity; the freedom.

Yet, it is best of those figures pass as quickly into legend as possible.

Wilson does not believe he can vote for change, and at least by implication, he advocates the violent overthrow of society. Which makes him either a freedom fighter or terrorist. And what is the utopia he wants to create? Details seem thin, but he describes himself as a crypto-anarchist.

What happens if Billy the Kid wins? What was charming in an outlaw (so long as it’s not my brother driving the stagecoach or guarding the bank) is not so pleasant in a warlord. Ask people in Somalia, for example, just how great it is to live in anarchy.

For all his rhetoric about opposing systemic aggression, Roberts seems to have been on the same path of violence, if the FBI’s accusations are true.

The Internet poses a whole set of problems that we as a society have never had to face before. Just how much do we want the government to see, when everything we do can be tracked? How about corporations? How do we prevent abuse? These are just a few of the questions that we are struggling towards answers for.

To answer these questions, we need to keep values like freedom firmly in mind, but we need to move quickly to practical, real-world solutions that will not actually make the world worse. Such solutions come from thoughtful leadership and a community that demands it. We need to demand more than the simplistic, adolescent idealism of Billy the Kid.