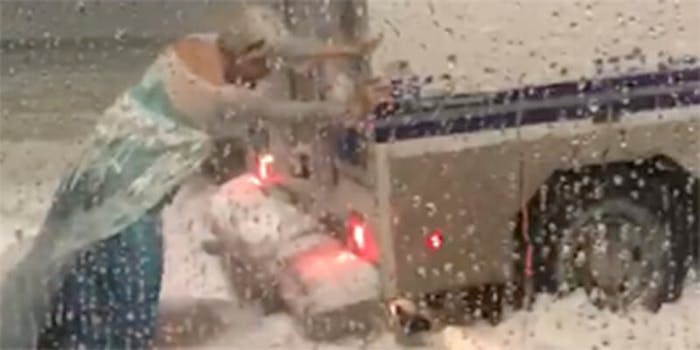 As the snow blew white on a recent night in Boston, a drag queen dressed as Frozen’s Queen Elsa volunteered to save a police van stuck in the snow.

A viral video posted on Facebook shows the buff Elsa—whose real name is Jason Paul, according to Twitter’s sleuthing—shoving the truck outside of a south Boston bar called The Gallows during a blizzard. Paul singlehandedly freed the van from a ditch full of snow, all while donning Elsa’s signature dress and heels.

In the video, chants of “Elsa!” can be heard from onlookers in the background. And people on Twitter had a great point.

Dang! You guys could have put your boots on and helped!

It’s fine. Elsa got it. The cold never bothered her, anyway.