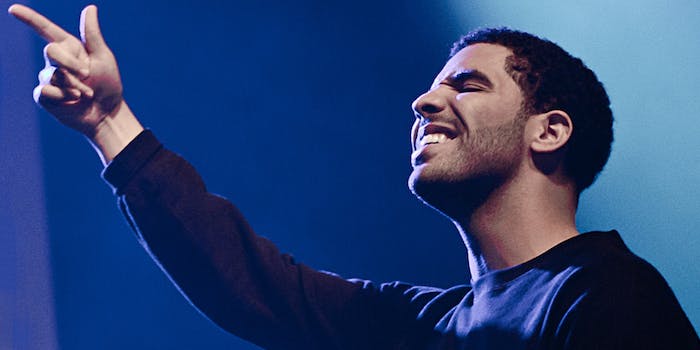 Everyone’s favorite crooning Canadian rapper has got themselves a new tattoo, and it’s so 2014.

Tattoo artist Doctor Woo has uploaded a photo to his Instagram page of a recent commission, and the existing ink on the arm in the picture bears a startling resemblance to those that Drake is known to have. But it’s the new addition to the collection that’s drawing all the attention.

Drake seems to have got an emoji tattooed on his right forearm.

Fittingly, for a rapper famed for his emotional navel-gazing, Drake’s new tat is of the praying hands emoji. Drake isn’t the first figure in the public eye to adorn their body with emojis, however; trailblazing NBA player Mike Scott is known to have multiple emojis inked across his body.

The trend isn’t just limited to celebrities either: The general public are also flocking to Instagram to show off their own emoji-inspired ink, of varying quality.

Let’s just hope Drake doesn’t find out that in the eyes of many, his new tattoo doesn’t represent prayer and spiritual contemplation—but something very, very different.

Most people don’t realize that, this “🙏” isn’t a prayer emoji. It’s just a high five.