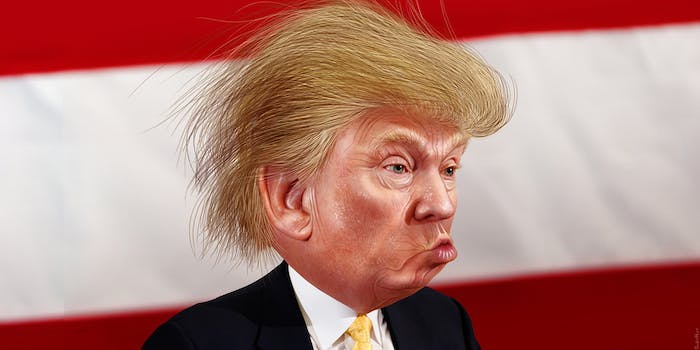 The rise of Donald Trump and Bernie Sanders is the political establishment’s worst nightmare. After releasing an “autopsy” of the 2012 campaign that blamed the overwhelming whiteness of the Republican party for Mitt Romney’s loss, the GOP is now faced with a loud, belligerent frontrunner who not only distances himself from Latinos but paints illegal immigrants as rapists and murderers. And after eight years of Republicans calling Obama a socialist, Hillary Clinton is being seriously challenged by an actual socialist.

The rise of two fringe candidates—Trump on the right and Sanders on the left—has perplexed pundits, but it really shouldn’t. The Internet, despite its unlimited array of media outlets and resources, has created an American population more politically divided than ever. Websites that use algorithms and data-driven analytics aim to give you what you want to hear politically, just as Pandora and Netflix suggest music and movies you might like. It’s an effect that is further separating Americans politically and, likewise, driving our politics to the edge.

As several studies have shown, Internet discussion has become increasingly polarized with the proliferation of social media. In an article for Medium, data researcher Gilad Lotan analyzed breaking news events across Twitter to illustrate the emergence of distinct echo chambers on the Web. By separating users based on their opinion of the aforementioned events, Lotan found that most users on social media directed their posts people of the same political orientation. Analyzing tweets about last summer’s war in Gaza, for example, Lotan found two distinct spheres of discussion occur with little to no crossover.

Websites that use algorithms and data-driven analytics aim to give you what you want to hear politically, just as as Pandora and Netflix suggest music and movies you might like.

Statistician Emma Pierson found a similar effect by analyzing tweets in reaction to a Missouri grand jury’s decision not to press charges against Officer Darren Wilson over the death of Michael Brown. Instead of reaching out to the other side, two separate camps expressed opposing views—with only epithets exchanged between the two parties. “We have two groups of people who rarely communicate,” wrote Pierson,” “have very different backgrounds, think drastically different things, and often spray vitriol at each other when they do talk.”

Eli Pariser calls these divisions “filter bubbles,” arguing that the very structure of many social media sites actively encourage the echo chambers noted by Lotan and Pierson. In his popular lecture at the famous TED Conference, Pariser defines “filter bubbles” as “your own personal, unique universe of information that you live in online.” Algorithms like those used by Facebook and Google to bring you the information you’re looking for, argues Pariser, also give you the news and facts you’re looking for—which typically will support the opinions you already have.

This will likely affect our political system—not only in the 2016 race but future elections—as research shows that the 57 percent of Americans who actually vote in presidential elections are already more likely to be on the far extreme ends of the political spectrum than those who respond to Internet polls. A Pew Research Center study of the last four presidential elections has found that political polarization has spiked since the 2000 race. It’s not an accident that this is when the Internet began spreading into many Americans home as a vital news source.

Although conventional wisdom is that moderates stand a better chance at getting elected, the last two decades have seen a different story unfold. In 2000, candidate George W. Bush ran a below-the-belt campaign against the moderate John McCain—and again beat out a more centrist John Kerry in 2004. In 2008, Barack Obama painted himself as the liberal alternative to Hillary Clinton in 2008 and won the nomination, before repeating victory in the November polls. Even 2012 GOP candidate Mitt Romney was widely considered a carpetbagging liberal by the conservative base who, at times, supported such hardliners as Michelle Bachmann and Rick Santorum. Romney went on to lose that race.

As we become more politically divided, so do our candidates and—eventually—our presidents. Donald Trump is the clearest example of this. Pundits are mystified by Trump’s ability to stay at the top of the polls despite a growing list of sexist comments that would have ended anyone else’s campaign. But it shouldn’t be all that surprising: His extremely partisan views on immigration, trade, and foreign policy are exactly what the GOP’s digital base wants to hear—which explains his popularity with online white supremacist groups. And in embracing the “far-far-far right,” as the Daily Kos termed it, Trump is taking the rest of the party with him.

A Pew Research Center study of the last four presidential elections has found that political polarization has spiked since the 2000 race.

Although he has far more credentials and experience than Donald Trump, Bernie Sanders is benefitting from the same polarization. Sanders, the Independent Senator from Vermont, is beating Hillary Clinton in New Hampshire and Iowa by double digits. Like Trump, this shouldn’t be a huge mystery. Hillary Clinton is a favorite of Wall Street, who view her as an ally in Washington, and is a noted hawk on foreign policy. During his presidency, even Barack Obama has faced liberal criticism for drone warfare and mass surveillance—so is it any wonder liberals might embrace a staunch Iraq War opponent who won’t stop talking about income inequality?

Of course, there are major differences between Trump and Sanders, which is why FiveThirtyEight’s Nate Silver urged pundits to stop comparing the two. “Sanders is campaigning on substantive policy positions, and Trump is largely campaigning on the force of his personality,” Silver wrote. “If you need [proof], check out the candidates’ websites. Sanders’s lists dozens of specific policy proposals across a wide range of issues; Trump’s details his position on just one, immigration.”

But while they might have differences in terms of substance and message, both candidates have much in common for what they mean for the future of our democracy—as a divided election will only continue to create a divided Washington. Crossing the political barrier for actual conversation is entirely possible online, but either the structure of social media or our own inherent confirmation bias is keeping us from doing so. We want what we want—not what we actually need.

The filter bubble might get Donald Trump or Bernie Sanders elected—but what happens when it bursts?