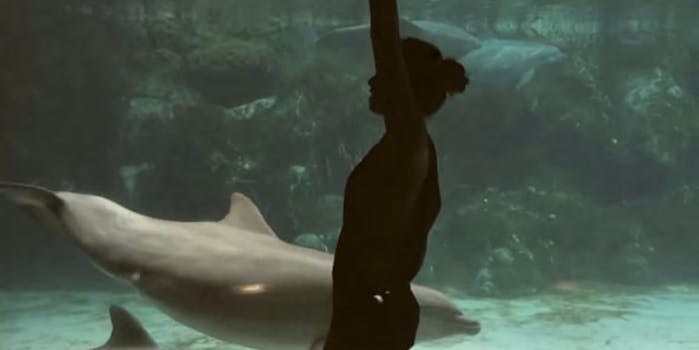 Watch a tumbling gymnast delight a pool of dolphins

Most of the time dolphins perform tricks for humans. This time around, the fins are flipped.

Most of the time dolphins end up performing tricks for humans. This time around, the fins are flipped.

FunDipped Productions, an Orlando-based circus theater company, made the dolphins the audience members when one of its members, Bonnie Anna “MissChief,” decided to perform some cartwheels and gymnastics moves in front of some of them.

Is it world class, or just amateur hour? For them, it doesn’t really matter. She’s probably the most interesting person they’ve seen today, and it didn’t involve any glass-tapping. They are amused.

The original 29-second clip went around last June, but FunDipped Productions released an extended version of the performance earlier this year, which is now being passed around again after it ended up on Reddit.