From the creator of 'Earthbound.'

Facebook and Twitter are depressing. It’s a problem universally acknowledged: There’s too much banal political discussion, too many hot takes, too many relationship laments. In short, other people’s opinions are exhausting. We’re just held in their sway because of FOMO… and dog pictures.

But what if I told you there’s now an adorable Japanese social app that dispenses with the soul-destroying garbage (anything that isn’t pet pics) and gives you only the good stuff (pet pics)?

It’s true. It’s called Dokonoko, and holy furballs, is it ever cute. Dokonoko—”Where are you from?” or “Where do you belong, little guy?” in Japanese—was created by polymath Shigesato Itoi as a way of looking out for one another’s pets. It’s “a place to keep a protective eye on your own pets, your friends’ pets, and even strays with no human family at all.”

Itoi is best known to Americans for creating the Mother video game franchise, which came to the U.S. as the quirky, big-hearted Super Nintendo RPG Earthbound. In Japan, however, he’s a famous copywriter, a judge on Iron Chef, the designer of a popular daily planner, and the author of a very upbeat diary/news site that’s been running for 15 years.

And anyone who follows Itoi knows he loves his dog, Bouillon.

With Dokonoko, Itoi turned his concern for animals into an iPhone app, so that “all cats or dogs have a place to call home.”

In theory, the app lets you share photos of your pets with your friends and other people nearby—and report missing pets or strays to make sure they’re taken care of. In practice, you can just browse “books” full of cute pics of people’s cats and dogs. 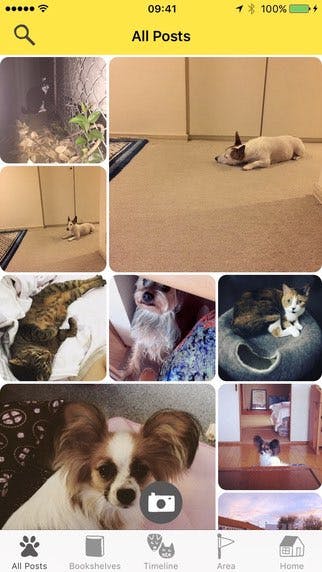 Dokonoko is the happiest, most laid-back kind of social network. There’s no fuss, and no demand to do the kind of unpaid online identity maintenance that Instagram demands of us.

You don’t even need your own pet to use it, you just have to care about other people’s. No joke, it’s in the terms of service. So far, no one in my neighborhood seems to have downloaded Dokonoko, but I’m content to peek in on the lives of Japanese pets I’ll probably never meet. Including Bouillon—because you can bet he’s on there.