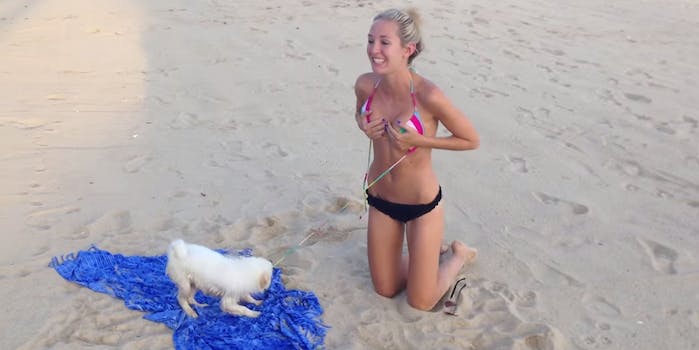 A blonde plays NSFW tug-of-war with a determined pooch. But that's not why she deserves to be Internet-famous.

Some rivalries are as old as time: good vs. evil, the Red Sox vs. the Yankees, and dogs vs. bikinis. But what began between a cartoon dog and a little girl on a bottle of Coppertone years ago, this pooch plans to finish today. The video, posted by Kendra Moriah on YouTube at the beginning of October, depicts the blonde playing tug-of-war for her top with a determined pooch.

After being posted to Reddit on Thursday by user mike_pants, the GIF and the video it was captured from immediately went viral, shooting to the front page of the news site for obvious reasons.

But the woman in the video isn’t just every man’s beach fantasy come to life, she’s part of a band as well. As one redditor, who is friends with Moriah in real life, pointed out, when Moriah’s not fighting for her top to stay on, she’s fronting a band called Dirty Little Blondes.

Even Moriah herself, who is amused by the attention her bikini struggles have elicited, is a bit flummoxed at what goes viral and what doesn’t. Commenting on her video, she wrote: “Thanks so much for watching but I must say, it’s crazy what the world decides to make viral. That same day we were out filming a fun little music video for my folk duo—Dirty Little Blondes. Those songs/videos take a considerable amount of time, effort, and talent and don’t get 1/100 of the love.”

So enjoy the comedy that is the singer almost losing her top to a dog, and then enjoy her tropical cover of The Little Mermaid’s “Part of Your World.” Both are beautiful in their own way.