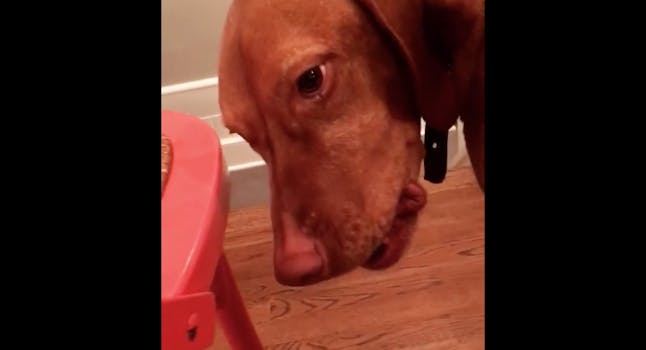 He saw his chance, and he took it.

Almost anyone who made it through high school also made it through the classic egg drop experiment. You use the incredible cushioning skills that only an American high school can teach you to protect an egg dropped from the roof of your school to the ground below. If the egg makes it uncracked, you understand physics! Congratulations.

In this failed early attempt at a colorful egg cocoon there is an additional hurdle—the family dog, Dutch. In typical dog manner he wastes no time scooping up the stray ground food and attempting to flee with it.

It should be noted that the contraption itself—though attractive aesthetically—was pretty useless when it came to protecting the egg. In fact, all it really succeeded in doing was launching the egg out of its protective walls and onto the ground. By the time Dutch reaches it, the experiment has already failed.

However, the highlight comes at the finale of the video, with the look on poor Dutch’s face as he struggles with the decision to either follow his family’s orders to drop the egg, or to just slurp it up before someone can take it away. It’s a classic dog dilemma, which is concluded when he tastes the unexpected and unappealing flavor of raw egg, which he promptly spits onto the ground to the dismay of his family.

It’s likely that the experiment would have turned out almost the same with or without Dutch, but at least this way his family has a priceless video to commemorate the exercise, which will last longer than an egg—uncracked or otherwise.