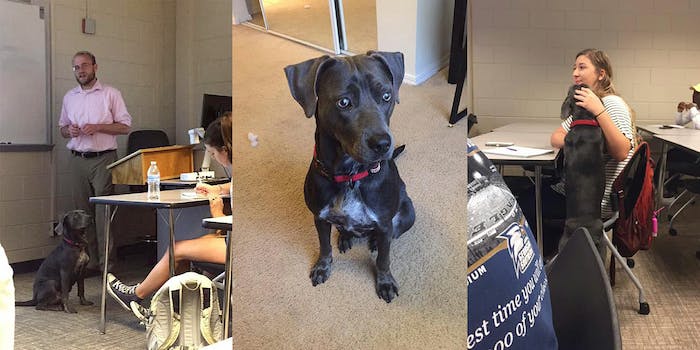 It's always "take your dog to class day" if there's a hurricane on the way.

The problems caused by hurricanes, both big and small, can seem both unending and unpredictable. Take for instance the case of Jessica Lewis, a student at the Georgia Southern University. She, like everyone else at GSU, was preparing to evacuate campus on Thursday ahead of Hurricane Irma, but Lewis had a bit of a problem. She wanted to leave directly after her last class, but she couldn’t leave her dog Luna behind. Meaning she’d have to drive all the way back to her apartment, and considering how crazy the roads were going to be, any lost time could have disastrous results.

After considering the possibilities Lewis decided the best course of action, even though it was a longshot, was to just email her political science professor and ask if she could bring Luna to class.

“I was trying to figure out the easiest and quickest way to her” Lewis told Mashable “because obviously I wasn’t leaving her there, and I was doing my best to get ahead of the traffic because all of Florida and coastal Georgia was evacuating north/west, so completely on a whim, I emailed my teacher and asked if I could bring her.”

“He responded in literally a minute” said Lewis “and I pretty much screamed and ran outside to show my roommate,”

As promised Luna was only the “teensiest bit disruptive”.

“She just walked around the classroom and got pets from everyone and made friends.” Said Lewis “The students were overall pretty excited about it when they saw her. They just took notes while they petted her and we all laughed together (professor included) when she did something funny,”

You’ll be happy to hear both Luna and her owner seem to be doing just fine following the storm.

“There was no damage to my family’s home up here and as far as I know my apartment in Statesboro is safe and we haven’t been given many updates on the actual condition of the school, but considering classes will resume Monday, I can’t imagine it’s too bad at all.”