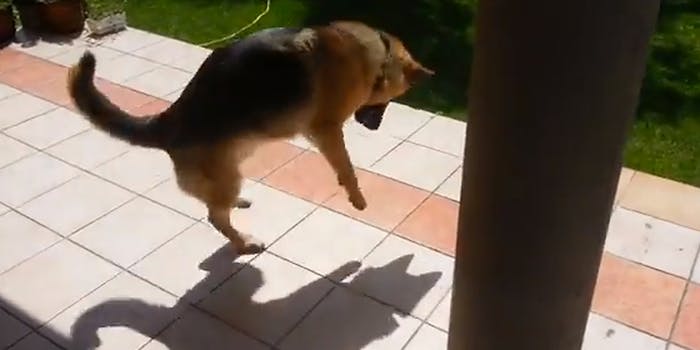 What secrets is this dog trying to beat out of its own shadow?

Forget about those flashy HBO standup specials and big-budget summer comedies. Some of the best laughs can still be found in your own backyard. Case in point: an adorable dog trying to pounce on his shadow.

For a little less than a minute, we get to see what appears to be a German Shepherd with Polish owners probe the spatial reality of the flat, black, German Shepherd-shaped thing on the sunny back patio. As he experiments with methods of attack, you can almost hear him thinking, “Damn, this guy knows all my moves.”

He’s not the only pooch with this problem, however, as other recent videos attest. It’s an epidemic of invading shadow-mutts, and only our loyal watchdogs can stomp them out!

A few viewers hypothesized that this was not simply canine capering, and that the dog knows something his humans don’t: Is there actually a dead body under those tiles? A stash of uncut Colombian cocaine? Who knows, we’re enjoying this too much.