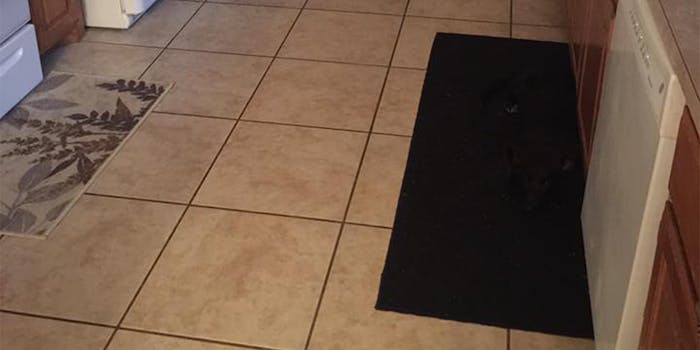 Can you find the dog hidden in this photo?

This hidden dog is literally looking right into the camera.

Everybody loves a good optical illusion. They’re like a little workout for your brain. They can be frustrating at times, but ultimately they’re rewarding when you figure out the “trick.”

This picture of a dog hidden in plain sight has frustrated a lot of people. He’s hard to find at first, but once you see him, it becomes obvious. Take a good look.

Some people assumed the dog was hiding behind something and that was the trick.

But no, the whole dog is visible and not hiding behind anything.

If you still can’t find him, don’t worry. We’re here to help. Here’s an cropped and lightened version. He’s staring right into the camera. It’s really the inside of one ear that gives him away.

And here’s an outline just so you can be sure.

There he is! Of course it doesn’t help that this wasn’t the highest quality picture to begin with. Still that dog does seem to match the rug perfectly. Maybe his owners should go ahead and paint those white lines on him. Otherwise he’s going to get stepped on the next time someone goes to do the dishes.