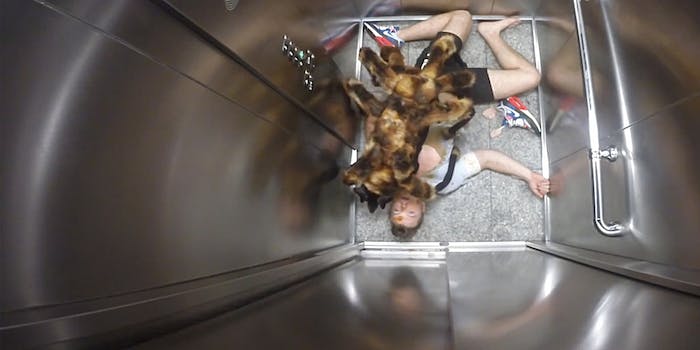 Three-foot spider in an elevator! Burn it! Burn it down! … Wait, is that a tail?

Spiders are already so frightening that people set fire to their homes just to get rid of them.

Crews have just attended a fire in a house Kenfig Hill because the resident sprayed a spider with an aerosol and then set it alight 11:57

No, seriously. People keep setting their homes on fire trying to kill spiders.

The unlucky commuters are confronted by a grisly, but staged, scene—what seems like freshly killed victims, complete with blood and dismembered limbs, tangled in a web. Then out of nowhere a dog-sized, hairy, and quick-moving spider comes sprinting toward them.

It all happens so fast that each of the pranked turns running and screaming from what they believe to be certain death.

It’s hard to deny how frightening the experience would be for almost anyone in that situation, but at the end of the video we’re all reassured that the death spider is just a lovable dog playing dress-up.