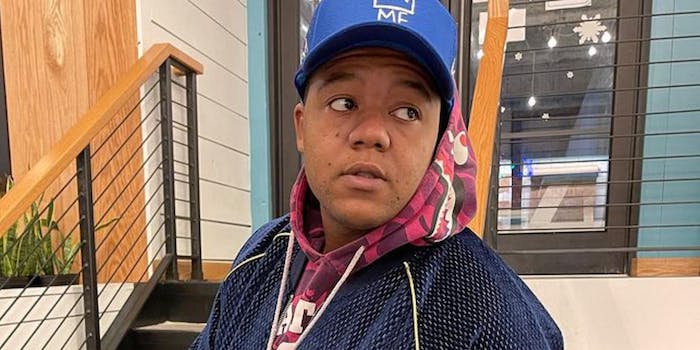 Massey was scheduled for arraignment on Monday but did not show

Kyle Massey, who is best-known for his roles in multiple Disney Channel shows like That’s So Raven, has been charged with a felony for allegedly sending pornographic material to a 13-year-old girl, reports TMZ.

The charge is for “one count of communication with a minor for immoral purposes,” according to legal documents obtained by the publication. He is accused of sending sexually explicit images, videos, and messages to the teenager in December 2018 and January 2019.

In March 2019, the unnamed teenager and her family sued Massey for $1.5 million in a civil suit, but he claimed he was being extorted and vehemently denied the accusations.

At the time, Massey’s lawyer Lee Hutton gave this statement to TMZ on behalf of the actor:

“No child should ever be exposed to sexually explicit materials and I unequivocally and categorically deny any alleged misconduct.”

According to TMZ, the civil suit went nowhere and the girl’s legal team advised her that the case was not worth pursuing because Massey did not have enough money.

That’s when she went to the King County Sheriff’s Office to file a report. The police then began investigating in early 2020 after the teen’s mom gave them a thumb drive containing the alleged explicit material Massey sent her, the documents given to TMZ state.

The documents also allege that Massey has known the teen since she was 4 years old, and that the two previously kept in contact to discuss her potential acting career.

The lawsuit even states that before the messages were sent in 2018, Massey offered to fly the girl out to stay with him and his girlfriend while she looked for a talent agent in Los Angeles, reports the Daily Mail.

While he hasn’t given a statement on the felony charges, he did ask fans to “not to jump to conclusions based on the allegations alone but reserve judgment until the whole story comes to light, proving these allegations baseless,” when the civil suit was first filed in 2019.

According to TMZ, Massey was scheduled for arraignment on Monday in King County Criminal Court in Washington state but did not show. He was active on Instagram Stories Monday and appeared to be at a promotional event for rapper Da Baby’s collaboration with BoohooMAN.

The Daily Dot reached out to Massey’s team for comment.