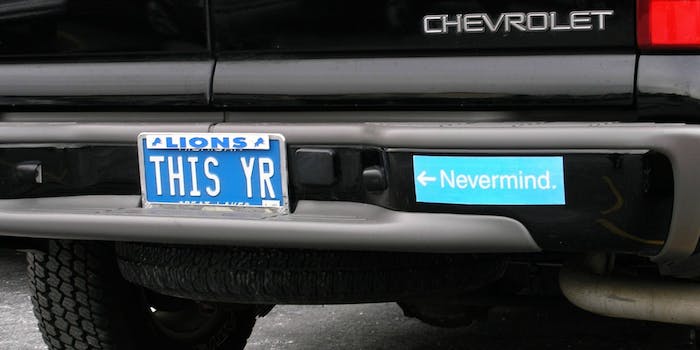 Donations are off to a slow start.

The Detroit Lions are a disaster this season, starting the year winning only one of their first seven games. After falling yet again last Sunday, the team fired the offensive coordinator and the offensive line coaches.

For a team that’s been to the playoffs just twice in the past 15 seasons, this year has been more painful than most, especially since the Lions were 11-5 with a postseason appearance in 2014 and had high hopes to repeat that success in 2015.

But one man has a plan to change all of that, and he wants your help.

A GoFundMe page created by a user named Jeff Tarnowski is asking for $1 billion to buy the Lions from the Ford family in order for “somebody … to do something about this monstrosity.”

I’m not going to rant, we all know the situation. … I am willing to make that sacrifice for all of you before this Honolulu Blue blood is no longer inherited by our offspring.

Now I’ll be completely honest — unlike some of you out there, I’ve never owned a professional sports team. I did, however, study business at ‘Thee’ Central Michigan University and that alone is worth its weight in gold on any resume. So I can guarantee, you will at least get the ol college try out of this superfan.

Some hairs were trimmed after falling to 1-6 but we’ve been trimming hairs for decades. Time to give this beast a full on Brazilian. As the old saying goes: ‘You need to break a few omelets before the Golden Goose will lay its glorious eggs.’

Tarnowski, though, is remaining level-headed. He knows he probably won’t get his $1 billion. So, he’s saying that whatever money he raises will be earmarked for charity. On the site, he answers a couple questions about the organization’s desire to sell (“We’ll see what happens when a billion dollars is on the table”) and if he’s serious (“100 percent”).

But the most-important query of all is why he’s asking for $1 billion in the first place. The answer: “Apparently, sports teams are expensive.”

That’s correct. According to Forbes, the average NFL team is worth $2 billion, and even though the Lions rank in the bottom-three out of 32 teams, they’re still valued at $1.44 billion.

But it doesn’t matter at this moment, because as of 2:45pm CT on Wednesday, 56 people had donated a grand total of $1,100, a mere .0000011 percent of the goal. The dream is still alive, but like Detroit’s season, the vital signs are not looking so good.