You'd think an airline would have a better grasp of geography.

Delta has apologized for an exuberant World Cup tweet Monday evening, in which it had celebrated the U.S. men’s national team victory over Ghana with an iconic symbol from each country: the Statue of Liberty, and a giraffe. 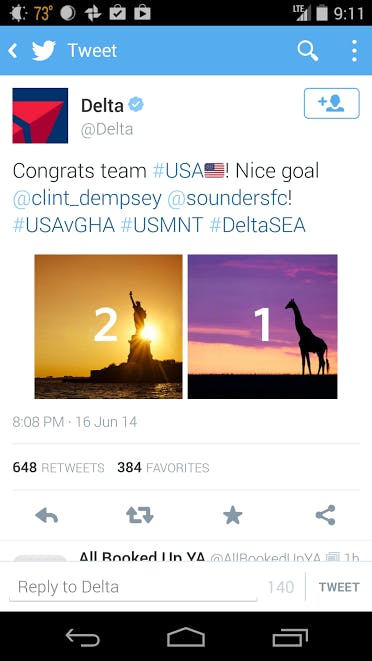 Except, as several users were quick to point out, while giraffes are scattered around many parts of Africa, they sure aren’t found in Ghana.

ok just in case anyone was wondering, i looked it up for you pic.twitter.com/Hs9TlWo5S8

Delta was quick to delete the tweet and apologize. It now blandly roots for “all teams.”

We’re sorry for our choice of photo in our previous tweet. Best of luck to all teams.

This is hardly the most uproarious photo tweeted recently by an airline, however. In April, US Airways tweeted, for some reason, a very not safe for work photo of a woman using a toy airplane as a sex toy.

Forthcoming @Delta statement: “This may be geographically inaccurate, but at least we didn’t tweet a Vagina Plane.” pic.twitter.com/nZ1zLi7xwd