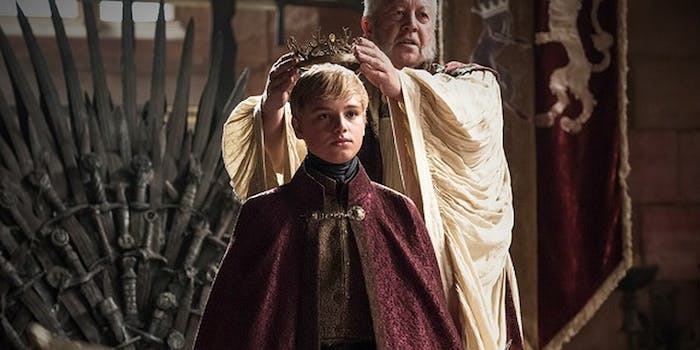 Not even George R.R. Martin could have come up with this plot.

Warning: This post contains major spoilers for Game of Thrones and A Song of Ice and Fire.

On Game of Thrones, members of the Baratheon-Lannister family have met their untimely deaths in some bizarre ways: poisoned wine, an arrow to the bowels, a wild boar spearing the gut. If you’re caught up, you might be wondering how King Tommen Baratheon, current ruler of Westeros, might go out.

In real life, the boy has already cheated death. Death by farts.

Dean-Charles Chapman, the teenage actor who plays young King Tommen on the show, said he was out for a ride when his driver got “the runs” and farted, almost killing the boy. Chapman documented the gas in a series of emoji-filled tweets:

Then, like a real George R.R. Martin plot twist, the king was saved:

You might not realize it, but farts have heavily influenced the drama of George R.R. Martin’s A Song of Ice and Fire series. I’m serious: If it weren’t for a tooting knight nicknamed Baelor Breakwind, the rebellion that set the stage for the Game of Thrones series would have played out very differently. Princess Elia of Dorne might never have married Rhaegar Targaryen, which would have had a profound impact on Robert’s Rebellion.